Architects have confronted the corner “problem” or the turning of the corner throughout architectural history. While the expression is common throughout architectural discourse, theoretical inquiry on the corner condition exits only in scattered fragments – a body of work has yet to holistically examine this concept and its overall significance. Why is it that the corner, a seemingly simple and standard feature, is actually a complex entity that has created a ‘problem’ in architecture?

In ancient Greek and Roman times, the relationship of the viewer to the building based on the corner condition was used for both social and political purposes. The Greeks intended space to be conceptualized and seen by a viewer at 45-degree angle to the building. The approach to the Acropolis along the 45-degree angle created a deliberate alignment with the sun that signified not only directionality but also spatial and political hierarchy. This diagonal relationship drew particular attention to the corner, manifesting a particular vantage point known as Greek Space. 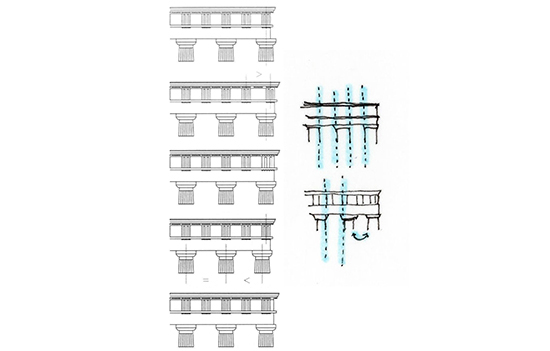 The Roman’s alternate solution to the corner problem generated an emphasis on frontality. Since the Romans’ sites were mostly confined, the gap between the front and side triglyphs at the corner was rarely noticeable; opposite from the open sites of the Greeks. Thus, the Romans favored a perpendicular relationship between the viewer and the façade that maintained aesthetic purity.

This emphasis on the exterior corner condition was replaced during the Renaissance with emphasis on the interior corner; a response to the development of internal courtyards (palazzo cortiles) as urban public space. During this time, the reentrant corner was heavily employed for both conceptual and aesthetic purposes.

At the courtyard of Palazzo Ducal, Urbino by Luciano Laurana, each façade ended with a column, which produced the intersection of two columns at the corner. To maintain a formal relationship at the corner, Laurana combined structure and ornament together by doubling the columns to create L-Shaped Piers.

Unlike Laurana’s move at Urbino, Bramante solved the corner problem by preserving a formal relationship of part to whole at the Palazzo Santa Maria Della Pace.  Alberti’s corner solution at the Palazzo Chiericati in Vicenza, Italy combined the aesthetic and geometrically unified corners of Laurana and Bramante. Alberti responded to the “problem” of the double column at the exterior corner of the palazzo by combining them on a 45 degree angle that implied a third pair.

During the Neoclassical period, emphasis was again given to vantage points that preferenced the oblique and in turn the corner. Shinkel’s perspective drawings of the Altes Musuem, emphasized the diagonal approach and the closed corner of the building, which implied the building’s recession into deep space. Philip Johnson would later echo this favor for the diagonal with his designed approach to the Glass House.

While the palazzo cortiles and perspectival images dealt with corners of a defined box, Frank Lloyd Wright introduced a new spatial effect for the corner by destroying the box.  This voided corner type created open space by attacking the traditional room at its point of greatest strength-the corner . In plan, Wright generated flowing space by dissolving the corner. At Fallingwater, Wright employed tectonic methods of cantilevering volumes to manifest the corner as a void.

Following Wright’s corner was the modernist rhetoric of the corner as a didactic countermove. Gerrit Rietveld’s Schroeder House denied the corner in order to accentuate the transparency between inside and outside space. At the Barcelona Pavilion, Mies van der Rohe manifested phenomenal transparency with a series of planes that produced an indeterminate spatial organization that not only framed views but promoted publicness.  At the Farnsworth House, Mies considered the corner as void to articulate the transparent relationship between indoor and outdoor space by having the vertical plane operate as a void .

At IIT, Mies countered these transparent corner solutions by solving the corner problem with an additive corner. At each corner he exposed two I-Beams creating a reentrant corner that in its absence of closed definition became a signification of the corner. Robert Venturi continued the spatial dialogue between revealed and concealed corners by masking the corner in his design for his Mother’s House. Venturi detached the façade from the volume of the house so that the corner was present but not completely evident. The modernist response to the corner proved that the corner could embody an architectonic system-reflective in materiality, form and scale.

Contemporary architectural designs continue to employ the corner to influence the perception of space.  Koolhaas/OMA’s Kunsthal is an example of where the corner was employed as a deliberate strategy. Koolhaas used the corner as a tactic of spatial definition to define the circulation armature of the museum. The corners are mitered to not only juxtapose materiality but to create a seamless sequence throughout the building. At Peter Zumthor’s Therme Vals, the corner is the origin for the offsetting of bond joints and is used to create a seamless visual continuity. 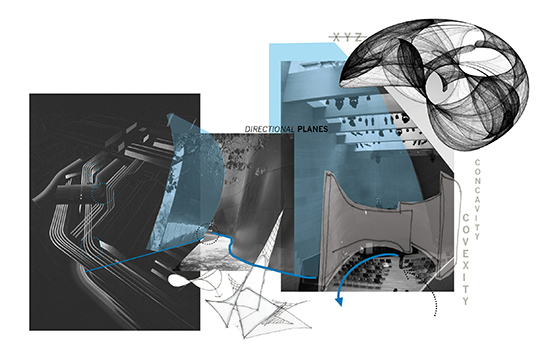