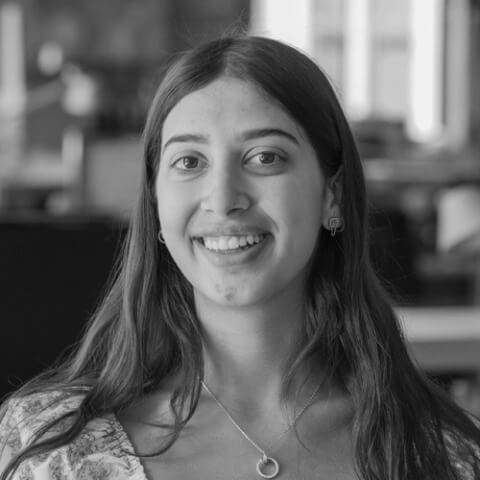 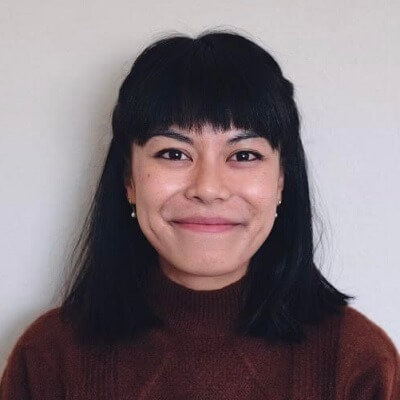 It is really important for designers to use our creative superpowers to benefit the greater good. There are innumerable ways that we can take advantage of our skill set and contacts to help others.  One of our favorite ways we do this is the organized by MillerKnoll. 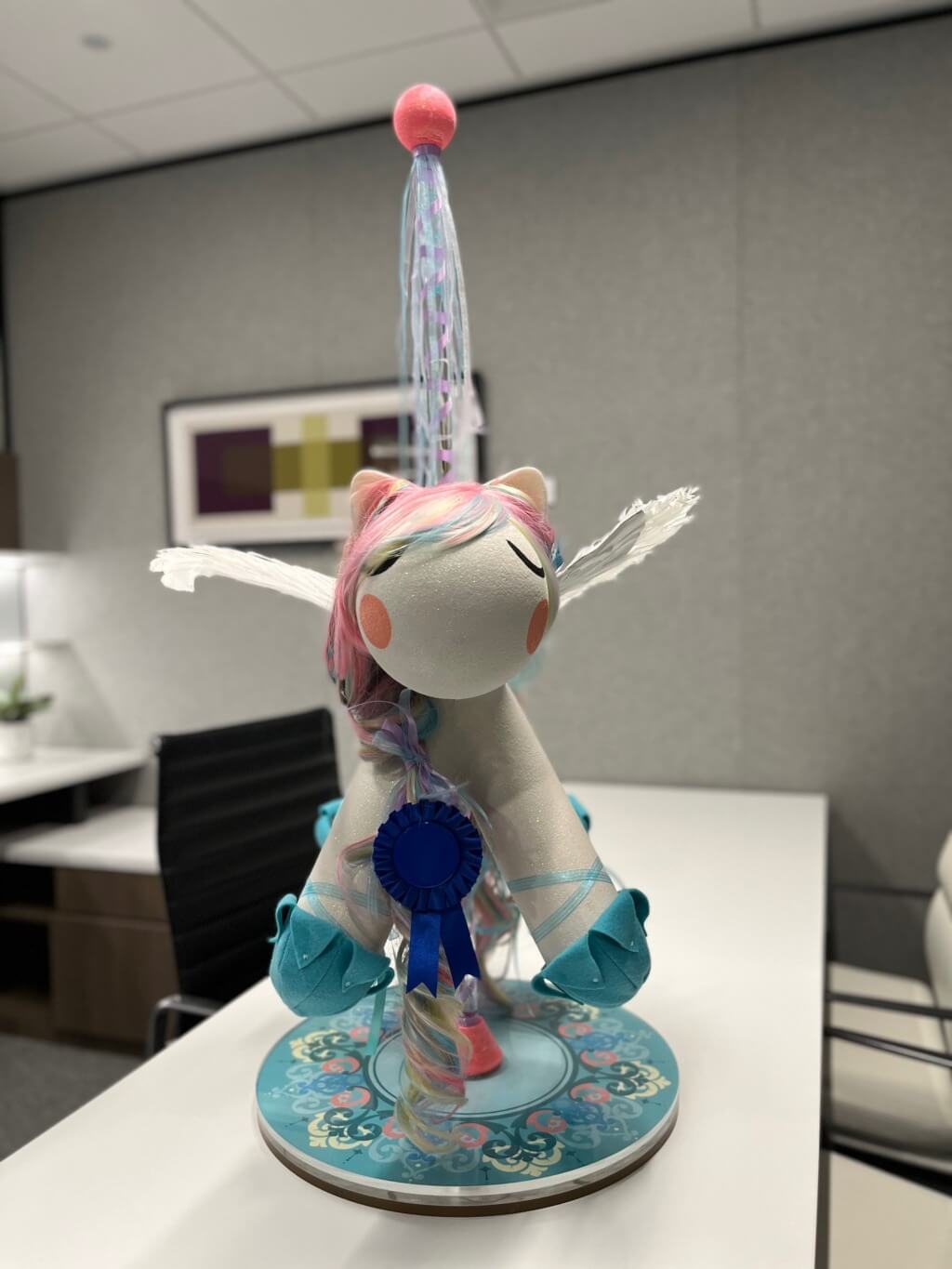 The Magis Puppy Design Challenge utilizes the Magis Puppy, created by the Finnish designer Eero Aarnio, who experimented with different organic forms, plastic, colors and shapes that resulted in the iconic, abstract puppy.

MillerKnoll’s Boston Magis Puppy Design Event benefits The Animal Rescue League of Boston (ARL), which heals and finds homes for tens of thousands of Boston animals. Because ARL relies entirely on the generosity of supporters, events like this are absolutely essential to making our community a better place for people and pets. All entries were judged, with ‘Best in Show’ awarded to the top 3 Puppies. During the event, the Puppies were sold at a silent auction with all proceeds benefiting the ARL. Payette competed against 18 other design firms and we were honored to be awarded first place!

Peggy’s name was inspired by the idea of Pegasus – an inspirational magical creature endowing a sense of beauty and majesty to the works in which he appears.

Pegasus today has been regarded as “the power of the creative spirit in all of us. He is the symbol of the Muses, of inspiration, and of the beauty we bring to our life and the lives of others. Guide for humankind beyond the physical world to the realm where the spirit can soar without limit.” For three weeks, the Interiors Department and FabLab collaborated after work, bringing our design vision for Peggy to life. 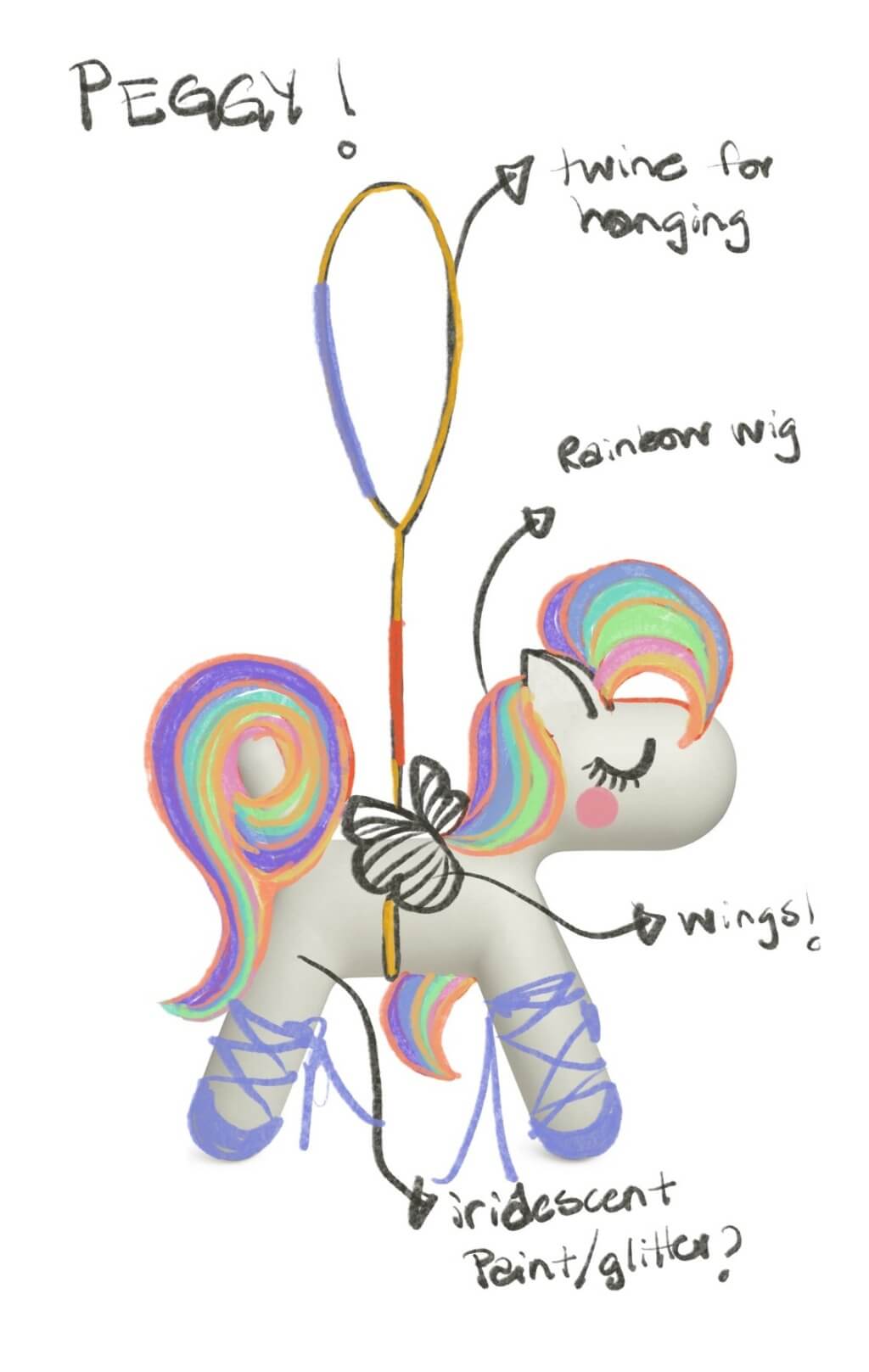 Transforming the blank puppy to Peggy was a challenge that required several hands. The fabrication team altered and added elements to the puppy, including 3D printing and attaching ears, drilling a hole for an acrylic rod to go through, as well as laser cutting and 3D printing additional accessories for the “carousel” stand.

The 3D printing was quite simple because we found a 3D model of the puppy and scaled it in Rhino, making multiple iterations of the ears so that they would sit perfectly on the puppy’s head. Additional prints were either accessories or hardware to keep the puppy “floating”. 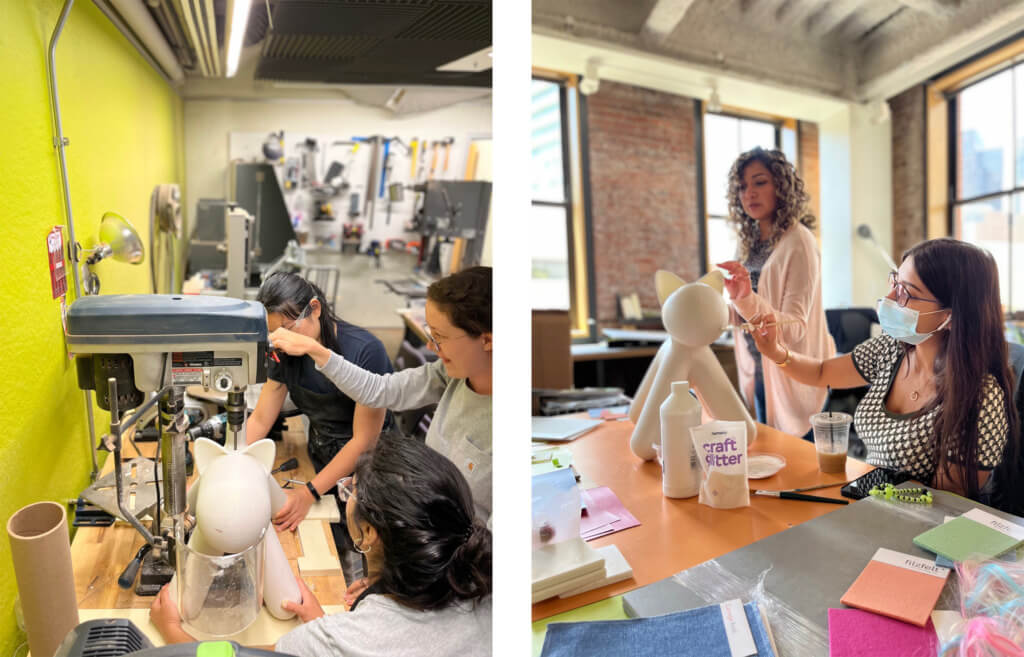 The challenging part was elevating Peggy. To do this, we first created a hole using the drill press- a process that required two people to hold the puppy in place while multiple passes were made, creating a perfectly centered hole for the rod to pass through. Once the hole was complete, the next task was creating a support system that would lift Peggy off the ground. The supports consisted of intersecting a smaller metal rod through the acrylic, which sits under Peggy’s belly and is hidden by a 3d printed washer.

The final task was creating a base to support the rod and Peggy. We layered acrylic sheets that laminated a colorful design to emphasize the carousel, having Peggy attached in the center to the acrylic pole. Overall this was an incredibly fun project to work on, which benefited an amazing local organization. 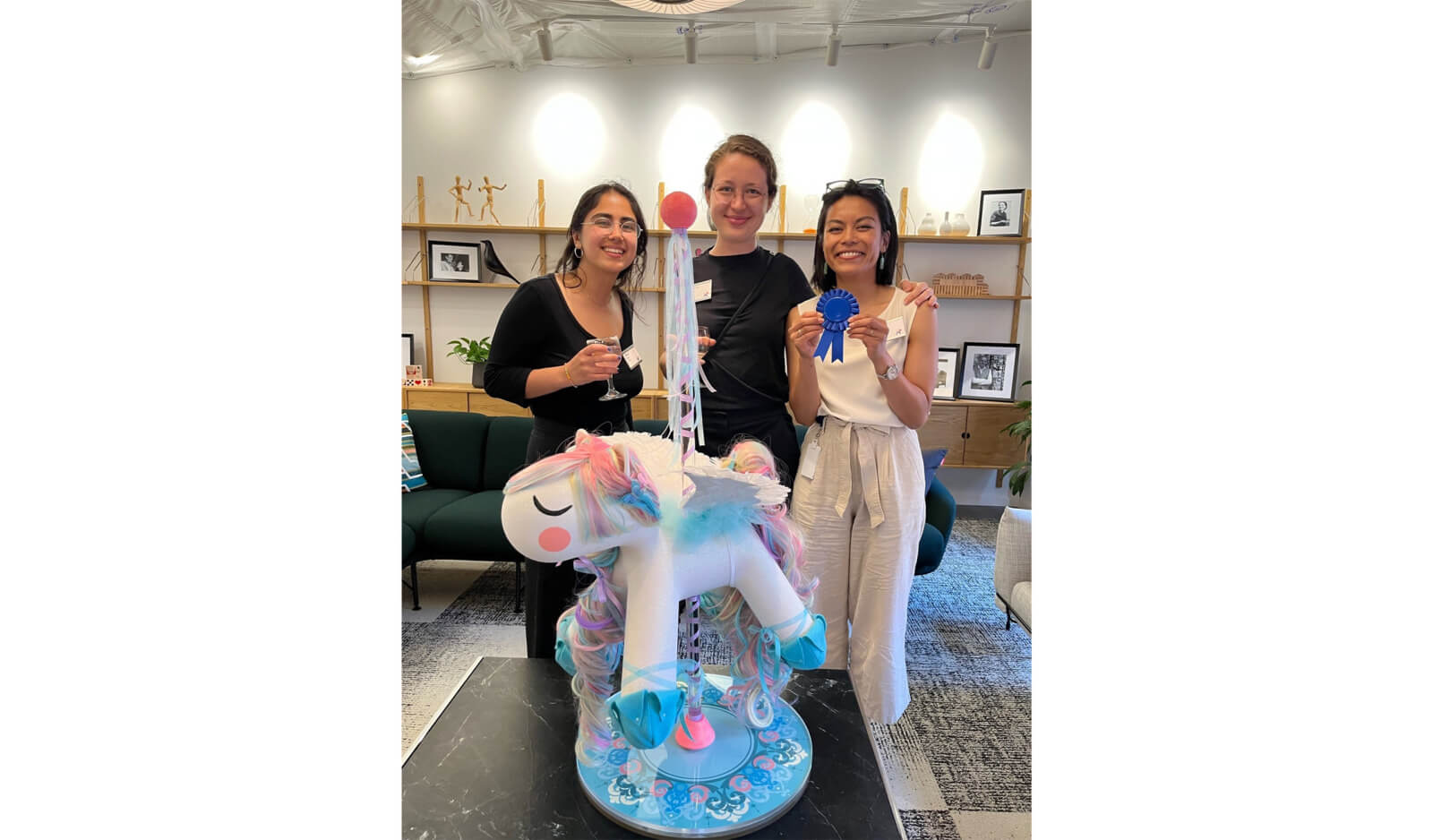 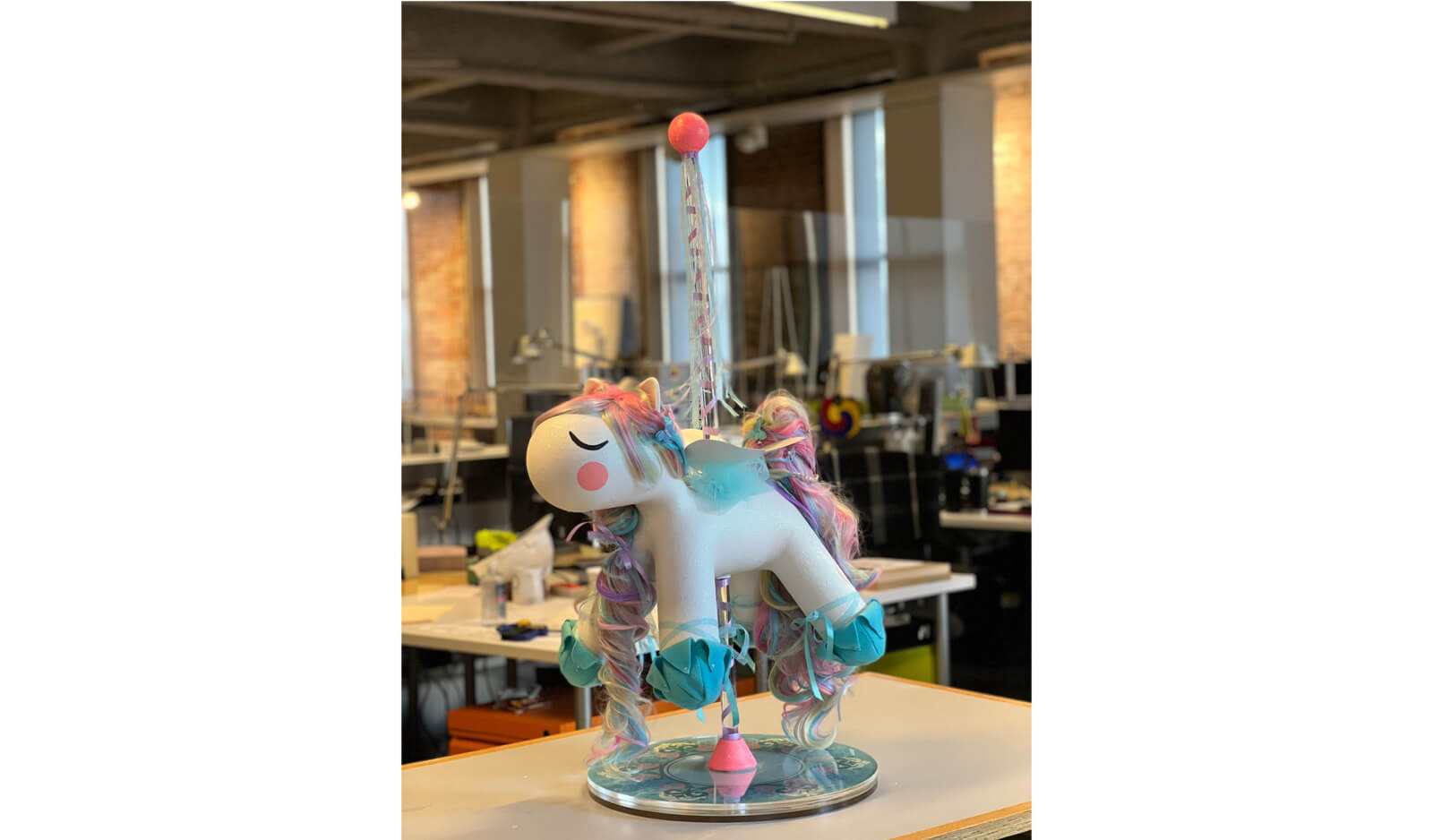 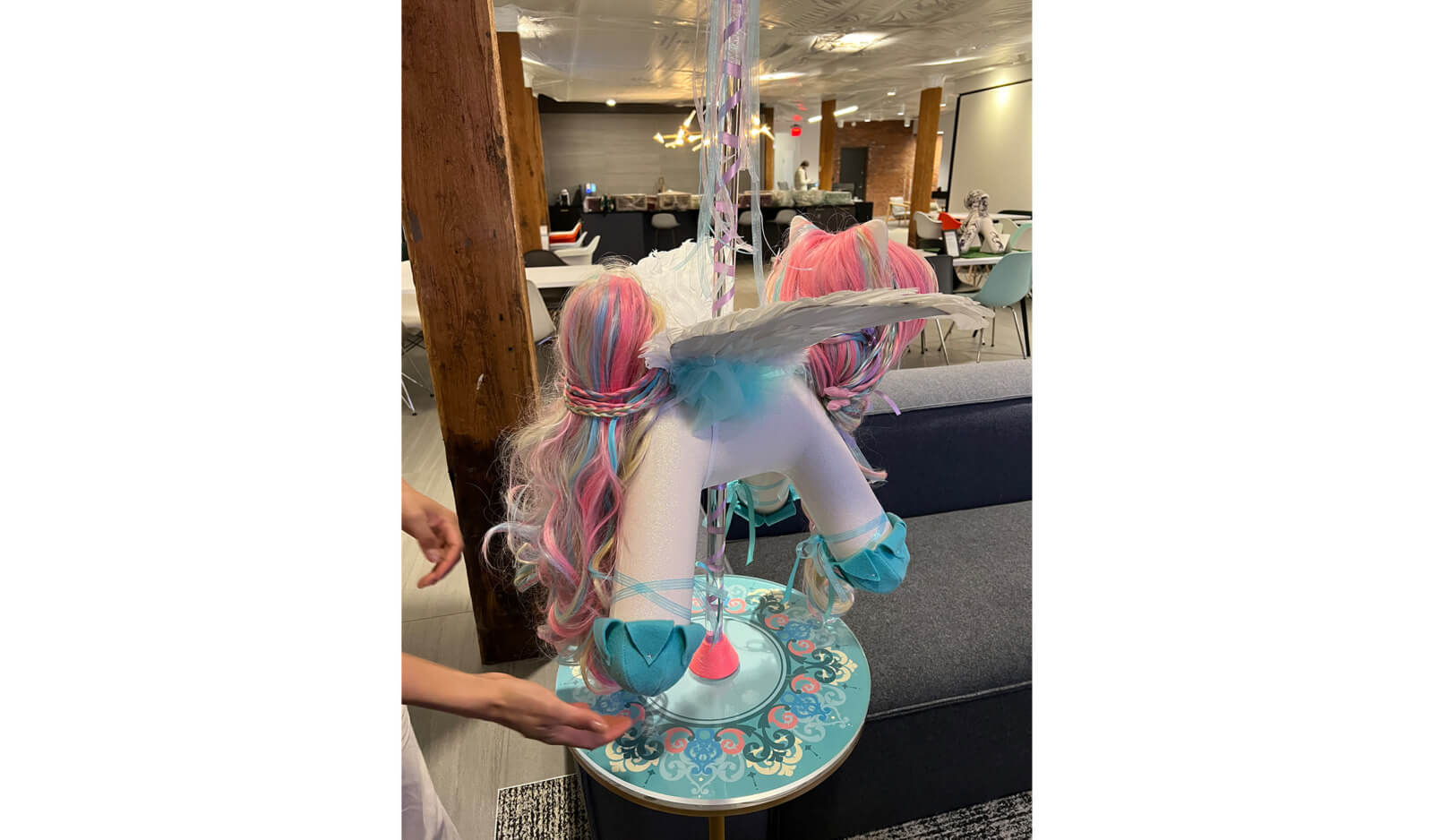 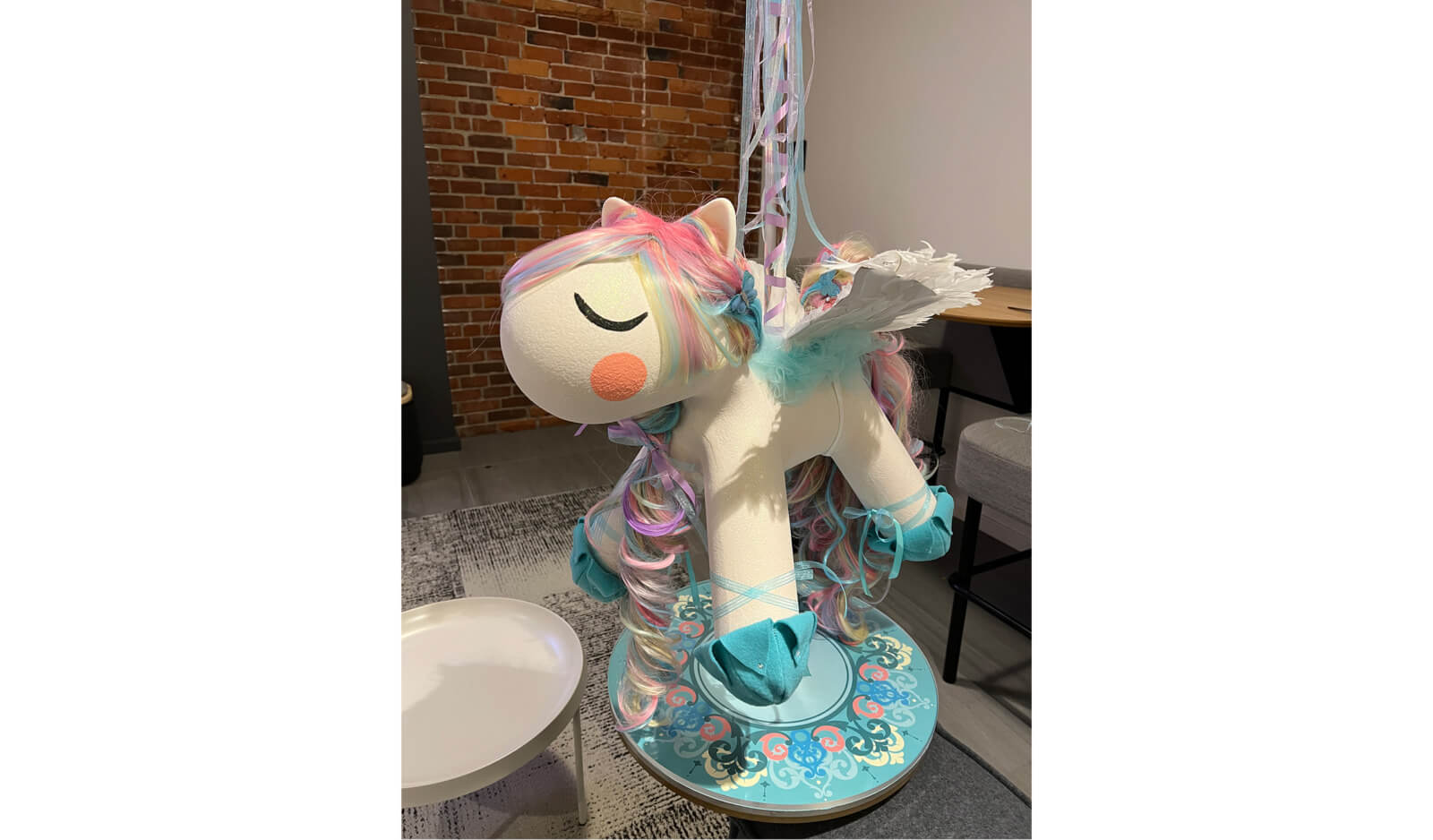 Art Heals: A Night of Creativity for a Great Cause