Kerry Drake is embarking on an once-in-a-lifetime opportunity, working with Engineers without Borders (EWB) Fellows program for six months in the highlands of Guatemala serving as an architectural representative.

It is well into the dry season in Llano Grande. A few hawks circle lazily in the blue sky, and the little river Chiquibeyquiej trickles merrily through a narrow canyon, pausing to fill green pools, cascading around a few boulders and providing a verdant habitat for the animal inhabitants. At the road crossing, the water is only a few inches deep, no problem for the hearty 4×4 Toyotas that traverse the steep rocky roads every day. 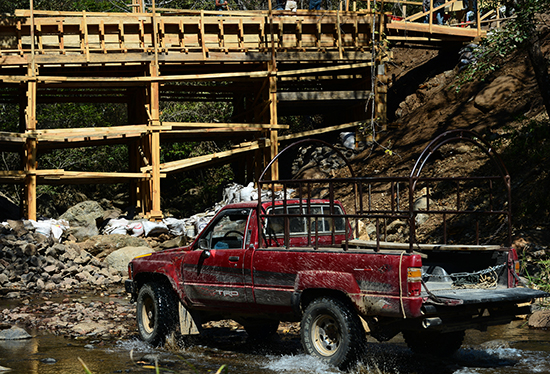 This is the Camino de los Caballos, the Horse Road, a road easily crossed on horseback during the dry season. However, in the depth of rainy season, the crossing is treacherous, and often impassible. An old wooden pedestrian bridge, upstream of the new construction was the previous option.  If crossing was necessary — for access to schools, markets, medical care — people would leave their vehicles on one side, walk across the bridge and arrange for someone to pick them up on the other side. In severe storms this is impossible.

The latest EWB bridge is providing a solution to this dire problem. The new concrete vehicle bridge is named “el Cantil” which means “the ledge” in Spanish, and is also the name of a local venomous. El Cantil stands approximately seven meters tall and spans about 15 meters across the canyon. It was engineered to hold a semi-truck, per AASHTO standards. It will serve approximately 15 communities in the San Martin District, giving them access to the hospital, schools, markets and other services in Joyabaj, as well as connection to the road to Guatemala City.

There is no Home Depot here — all of the timber for the formwork was sourced from the surrounding hills. The quantities and sizes of planks (tablas) and 2x lumber (reglas) were cut to order by a man with a chainsaw.

On our first two days at the site, we worked on finishing the wooden formwork, which included measuring and sawing tablas, and nailing them into place to form the deck and the beams. We also built a ramp that would carry the concrete from the hillside to the platform. Tools are spare, and there are few pre-fabricated products. For example, if you need  a ramp, saw horse or hand rails, you’ll need to build them yourself, with the lumber on site.

Every day the communities provided volunteer labor, usually between 10 and 20 men. We had 80 men the day we poured the deck! Also, there was usually an assortment of dogs milling about the site, and occasionally children and women who came to watch their husbands and brothers work. All of the laborers were hard working and happy to contribute to this project which will serve them for generations. 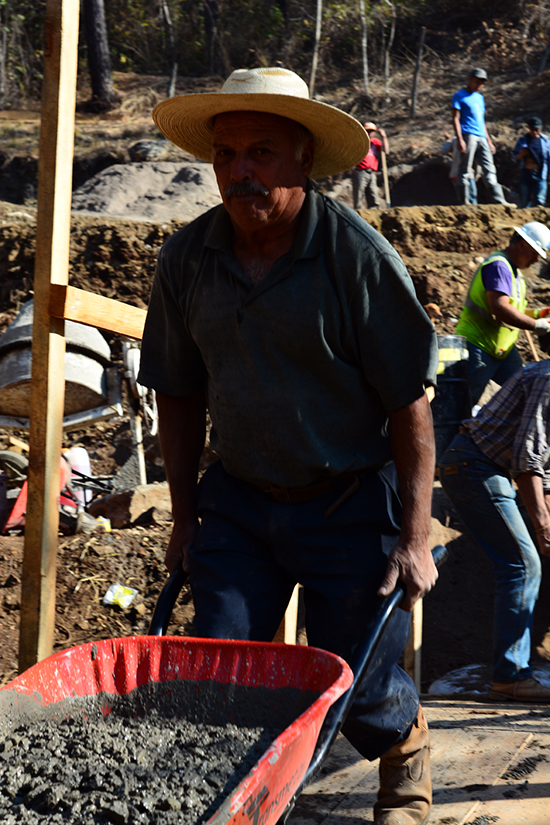 On the third day, we were ready for placing the beam steel. The steel beams were tied and prepared days in advance. A group of 40 men lifted the steel and slowly carried each beam down to the awaiting formwork, like a human centipede. There was a tricky turn and slippery gravel slope to navigate, but in the end all beams were placed successfully. In this country, human labor is cheaper than running equipment, so it makes sense to do the work with men instead of cranes or other machinery. The procedure was repeated three more times for the other beams. 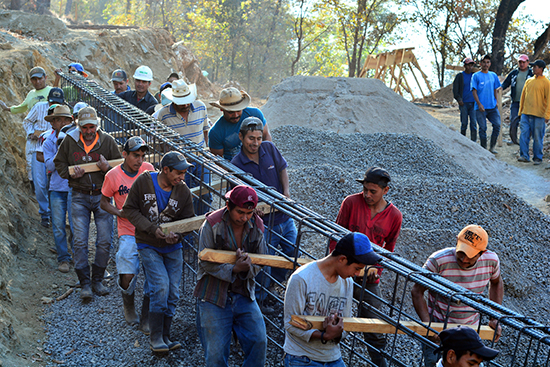 The following two days, concrete was poured for the beams. Two beams per day, so as to spread the load and not overtax the formwork. Wheelbarrow after wheelbarrow were carted down to the team with shovels and vibrators. A small hose brought water up from the river, but when that wasn’t enough, two men were sent down with buckets to bring it up on their shoulders.

During the beam construction process, other teams were building up retaining walls that connect the bridge to the road; they will hold backfill to complete the driving surface. One wall was constructed of stone filled gabions, and the other three were hand-placed stone masonry walls. All of the stone was gathered by locals from their farm fields. A truck picked them up, dumped them at the site and the worker set up long lines to move each rock one-by-one.

With the beams poured, the rebar was put into place for the steel deck. A team of men worked slowly across the deck, tying bars together, as we handed them the next in line. 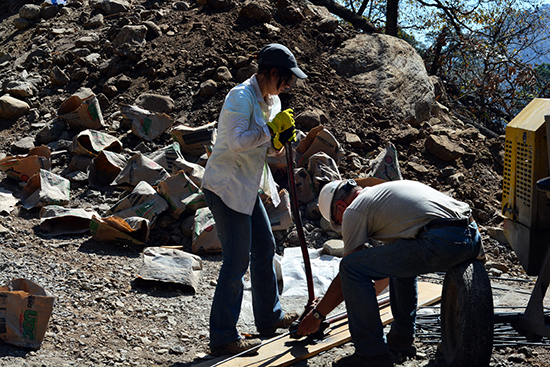 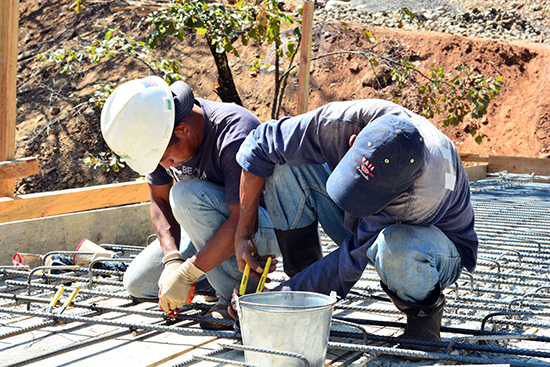 It took about five hours of continuous work to place the concrete but finally the deck was poured! 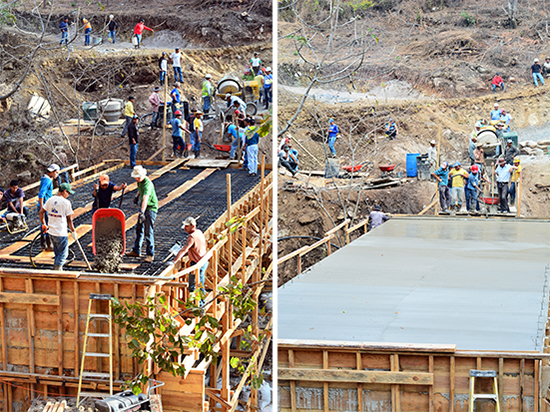 A small ceremony of appreciation was held for the EWB team, as our work had ended.  We returned to Joyabaj, and the rest of the team returned home to Wisconsin.  In a few weeks, the forms will be removed, and rumor has it that a large fiesta will be held to inaugurate the bridge. 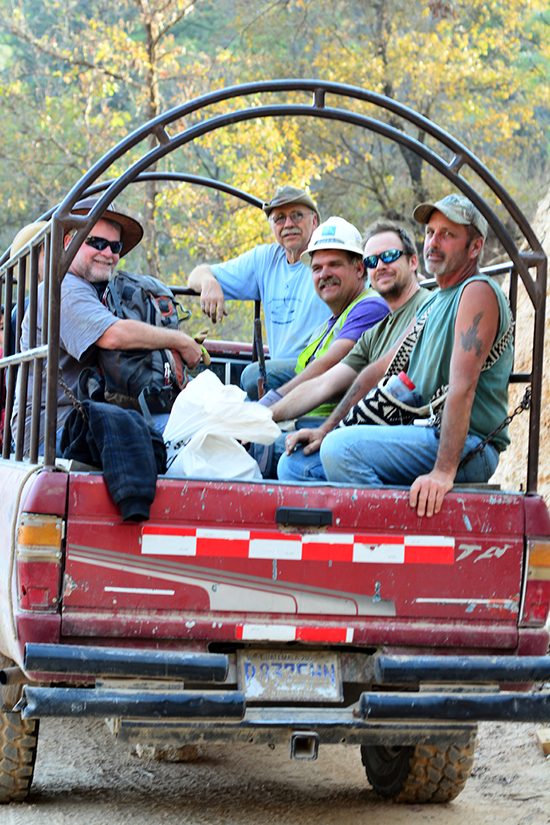