Kerry Drake is embarking on an once-in-a-lifetime opportunity, working with Engineers without Borders (EWB) Fellows program for six months in the highlands of Guatemala serving as an architectural representative.

Over two months have passed since I’ve arrived in Guatemala! My project is to oversee the construction of a high school in town and was handed the project manager’s hat. I am directing the project schedule, ordering materials, interpreting the plans and communicating with various interested parties including the construction workers, the Muni (municipal government), the engineers back in the US and neighbors to the site.

This project is the first public high school in Joyabaj.  The Muni started a public high school program a few years ago, but it is currently housed in the elementary school next door. They only have the ability to serve the students in the afternoons, in classrooms set up for smaller children. Going to high school is still a luxury here. While the elementary school has about 1,000 students, the high school only has 150 attendees.  This gives you some idea of the drop-out rate. Until the high school program was created, students who wanted to attend went to small private schools (financially unavailable to most), or traveled to other cities hours away, living with relatives. 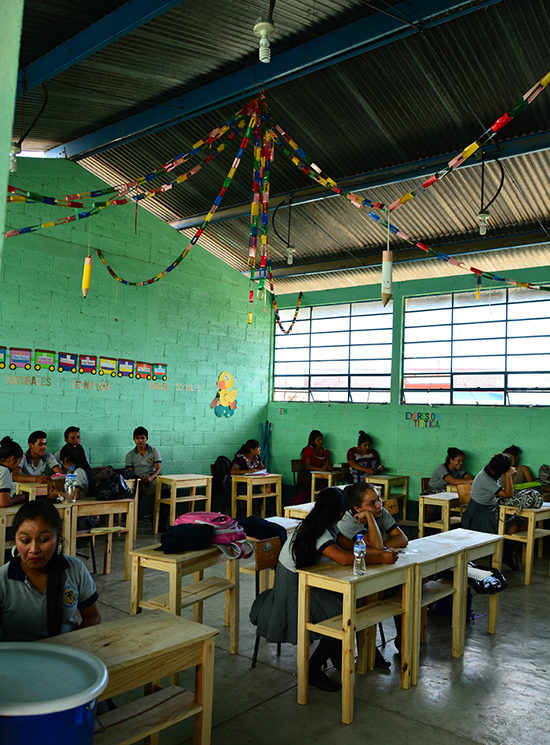 This new school will help attract better teachers, provide space for age-appropriate curriculum and give the high school a much needed identity. The mayor would like to improve college-preparatory courses; my understanding is that the students from Joyabaj that do eventually make it to university have a tough time keeping up. This is not surprising, considering the lack of resources. They do have a computer lab, but other than that there are no specialty rooms supporting the arts, sciences or other subjects. 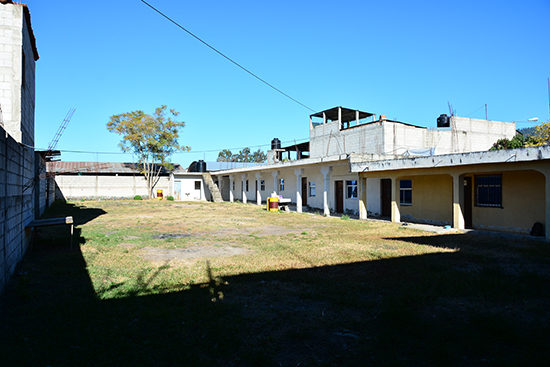 The Muni purchased a small site behind the existing elementary school. It is a courtyard house with a rectangular yard and a long row of rooms. It reminds me of a mid-century roadside motel. The project is divided into two phases. The first phase is converting the existing building into offices and classrooms. This involves demolishing interior walls to make bigger rooms, as well as removing the existing roof. The second phase is constructing three additional classrooms from the ground up.

Demolition started mid-February. The most important task was removing the existing roof. Typical roofs here are either concrete slab or corrugated metal panel. However, this roof was constructed of concrete block. The 22” hollow concrete blocks were suspended between concrete joists with a thin slab poured on top. No doubt that an earthquake would send all of these blocks tumbling onto the heads of people below. As it was, a good mallet strike was all it took to get rid of them. 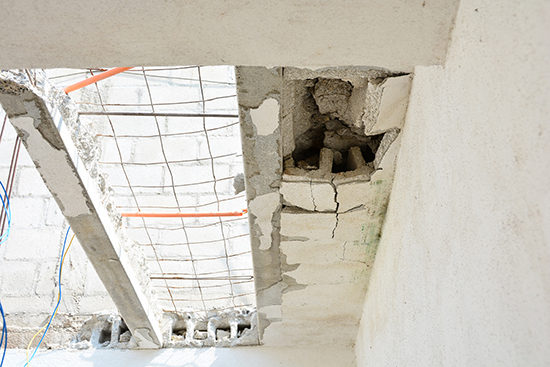 The block and topping slab was extremely crumbly, and thankfully now all has been removed. A lightweight metal roof will take its place. There was another structural surprise awaiting us in the walls – as we removed some walls to make large classrooms, we the found that the center columns were highly irregular.  We are planning to replace those as well. Mark Rapant, architect, engineer and designer for this project, visited to review the project’s progress and develop design details, as well as design and construct the formwork for the new beams and columns. 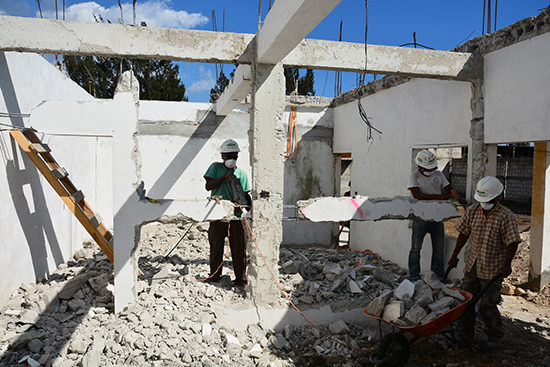