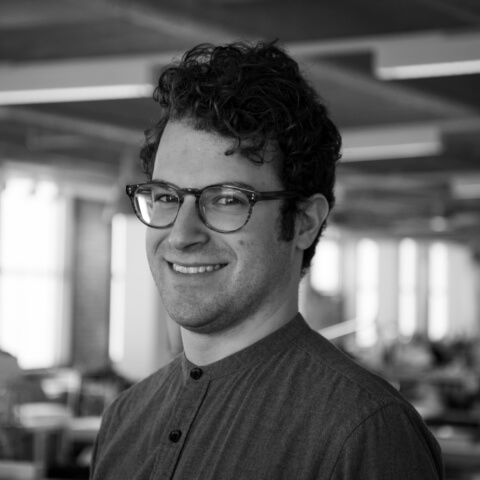 This is the second of a three part series of posts diving into the design of all-gender restrooms and current obstacles to building them.

While redesigning restroom signage for all-gender facilities is relatively easy to grasp, building code—the set of rules and standards regulating what can and cannot be built—is a much thornier topic to tackle. Code is vast, covering everything from building materials to egress pathways. Each state in the US has its own unique set of building codes. California has sections about earthquake resistance, for example, while Maine has sections about snow loads. Building code is also slow to change, which in the case of restroom designation, can lead to it becoming woefully out of date. 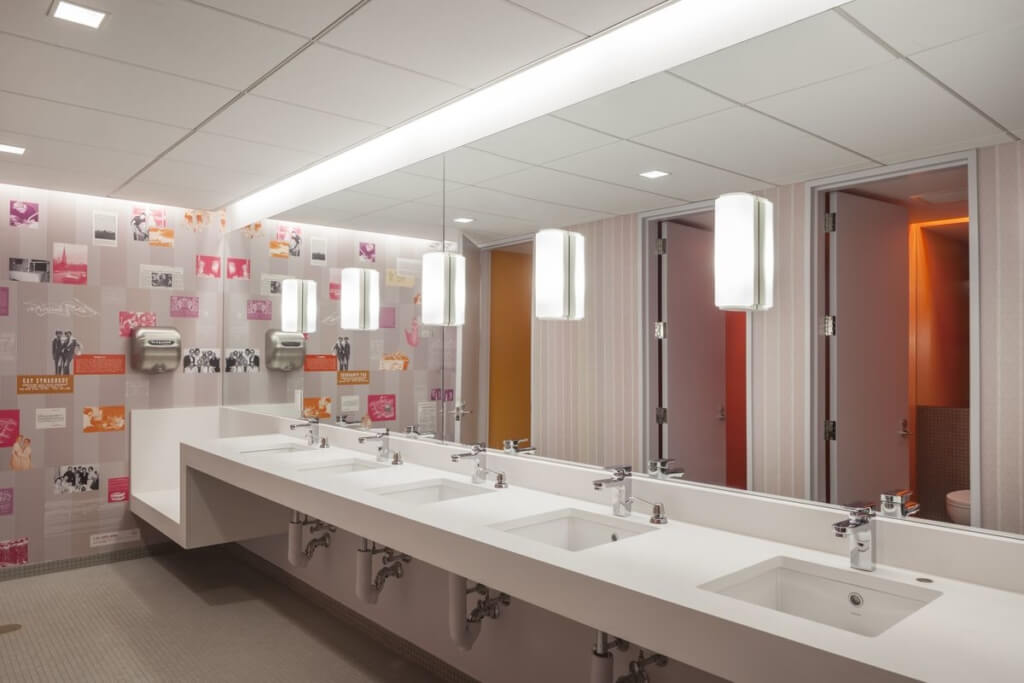 The all-gender restroom at Congregation Beit Simchat Torah in New York, designed by ARO, which required a unique ordinance from the NYC Department of Buildings in order to be built.

The specific part of plumbing code to pay attention to with regards to gendered restrooms is fixture count, which relates to occupancy levels; for every x square feet in y type of building, z number of fixtures (toilets/sinks) must be included. In many state plumbing codes, public buildings must have equal fixtures for men and women, including single- and multi-stall restrooms. What happens if a fixture is included in a restroom that’s not gendered—say, a single-occupancy restroom? In Connecticut, that fixture doesn’t contribute to the total count. If it’s not designated male or female, it may as well not exist in the eyes of code. Mandates for separate male and female facilities explicitly exclude users outside that binary.

Code can be circumvented via an exemption or modification for an individual project, as was the case for an all-gender restroom at Congregation Beit Simchat Torah designed by ARO which required a unique ordinance from the NYC Department of Buildings. Depending on the state, however, the process of getting an exemption or modification on a project-by-project basis can be prohibitively complicated. Yale University tried to re-label a few restrooms in its Law School as all-gender in 2017 and had to appeal to the state Supreme Court in order to secure a code modification. Few clients or building owners have the resources of an institution like Yale to petition multiple governmental bodies or file a years-long appeal just to change bathroom signage, so many facilities that can technically be converted to all-gender are not, because the process of doing so is so difficult. 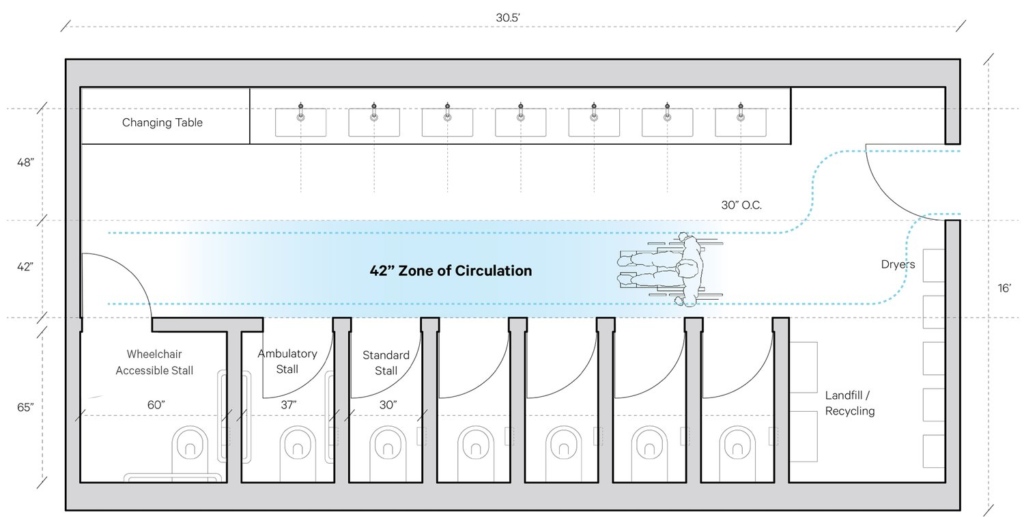 A plan diagram of a multi-user all-gender restroom, from Stalled!

There are promising code changes on the horizon. The International Plumbing Code, the model code book adopted by 35 states (including Connecticut), added language in the 2018 edition to allow for single-user all-gender restrooms. The 2021 IPC will include an amendment allowing for multi-stall all-gender restrooms after a years-long lobbying effort by the National Center for Transgender Equality, design/research advocates Stalled! and American Institute of Architects. While the IPC is making progress, it’s non-binding, so states must opt to update their own plumbing codes for these policy changes to take effect practically. These updates can happen years after the IPC is changed. Many states are still using the 2015 IPC (or even earlier editions), so the 2021 IPC may not see widespread adoption until well into the mid-2020s. Changing building code is a long, laborious process, but the gears have started turning, and it’s clear that code trends are moving towards explicitly permitting all-gender facilities for all users in all cases.

The next and final post of the series will look at the design implications of all-gender restrooms and built examples.

Great to see part 2 and eagerly awaiting the next segment about design implications!

Terrific series, thanks for writing these! It’s great to see that the model codes are adapting to the times. One of the advantages is that even if a jurisdiction hasn’t adopted the new code, it can lend additional weight to an application for a modification or variance. If the code is moving in the same direction as the applicant’s design it makes the argument for approval that much stronger.