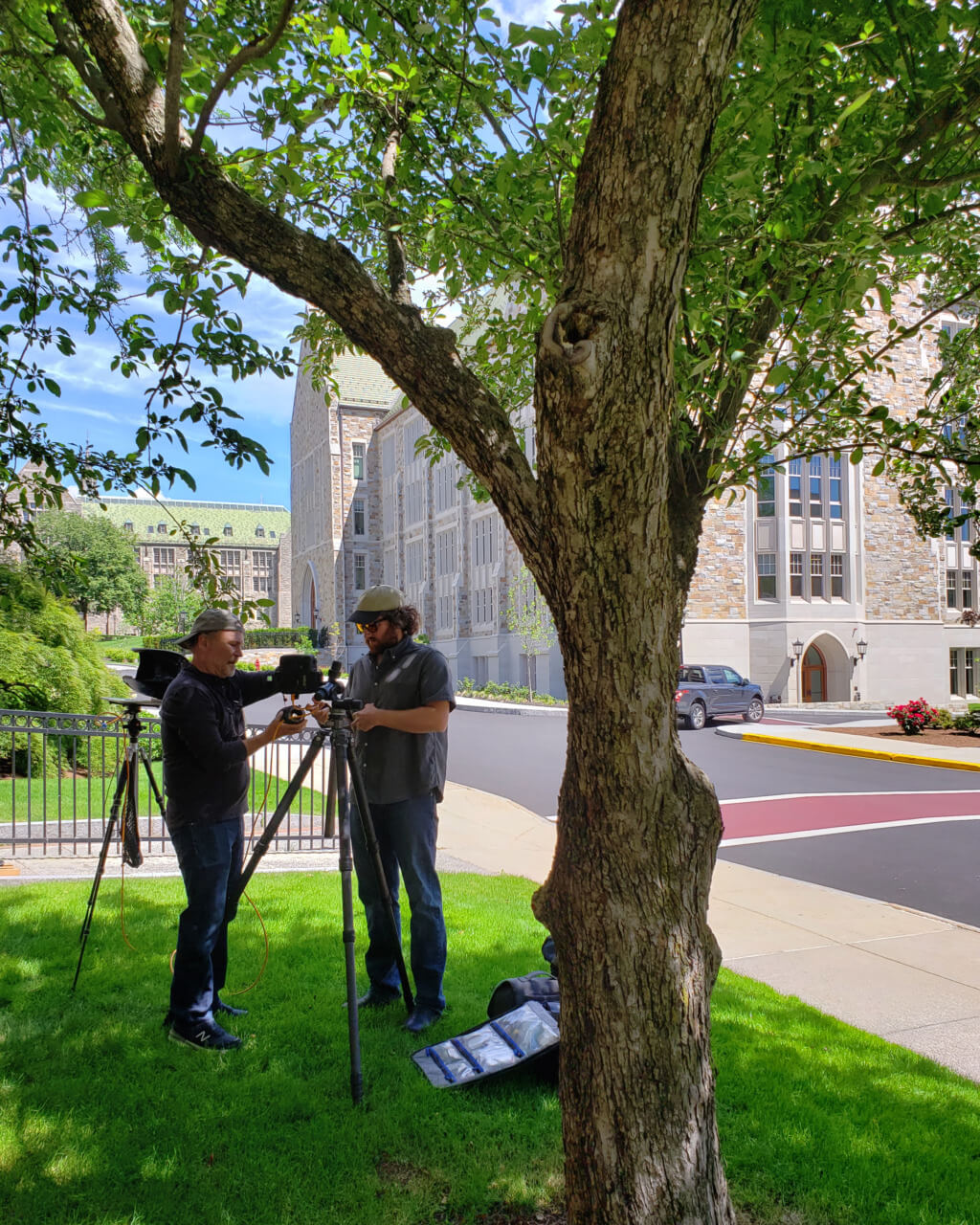 As one might imagine, architectural photography hinges on the whims of the weather. Yet, on the Friday of our 245 Beacon Street photoshoot, we were blessed with the most beautiful day; the rainy week prior washed away the pollen, leaving behind immaculately green grass, blue skies and fluffy clouds.

Because this would be the final photoshoot for the building, the agenda was purposeful- exterior shots, the cleanroom and dusk shots. Preparation for a photoshoot like this one begins many weeks in advance – scheduling the photographer, checking the forecast, ordering props – and many hands are required for the shoot to run smoothly. Details as minute as timing the direction of the sun upon the façade to the color of the clothing we wore were all carefully considered before the camera was even brought onto the scene.

The night before, project manager Diana Tsang visited the site to capture test stills of the building lit in the evening. The day of, those on site (principals, project members, the marketing team, most importantly, the photographer) scouted and discussed potential locations and angles. Architecture is made to be lived in; as compositions were decided upon, live models (staff members and passers-by) were captured and added in layer by layer until the composition was complete. 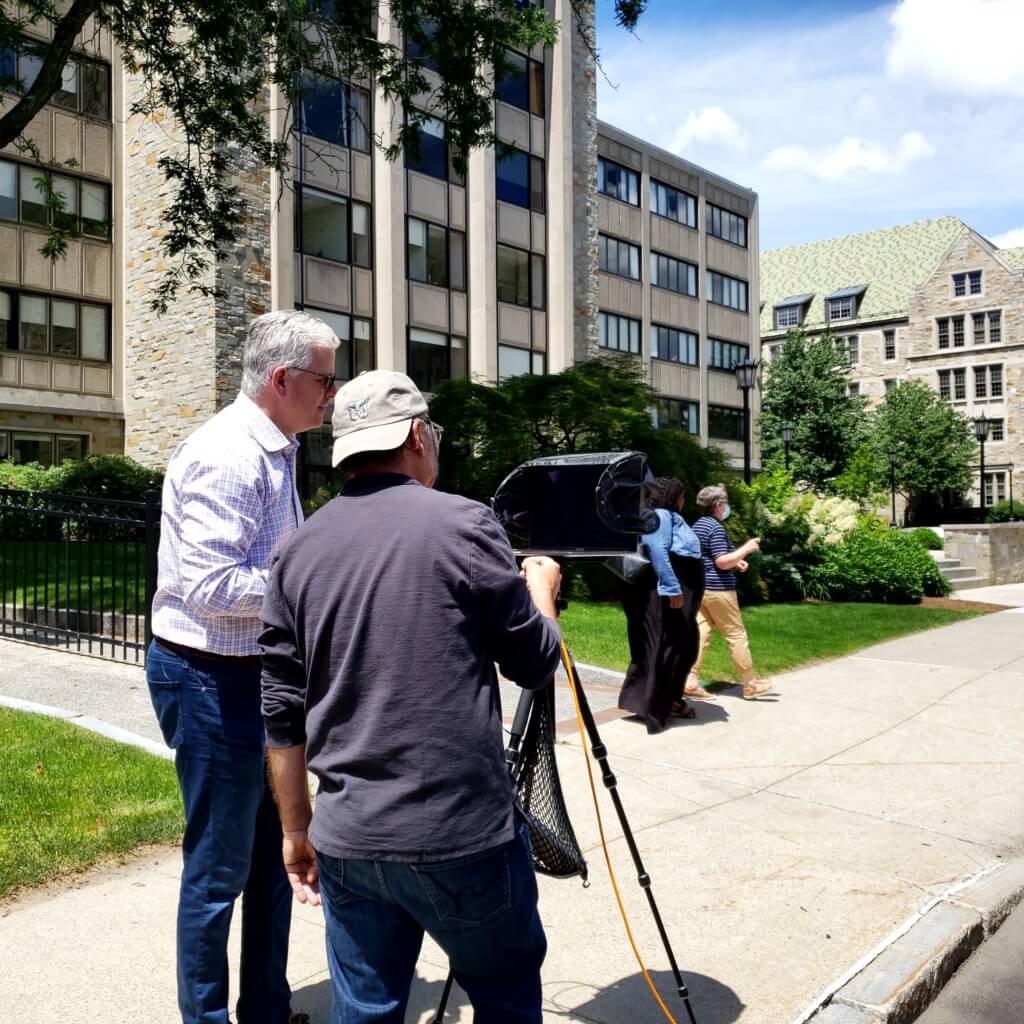 Photographs showcase projects for our portfolio, design award submissions and future project proposals. Often these images will be the only way others will experience the building. Therefore, it is important for architectural photography to not only show the architecture, but to offer new perspectives on lines, symmetries, patterns and other qualities that may be overlooked. A skilled photographer will be able to analyze the structure, understanding its story and design intentions.

Boston College exemplifies uniformity in its classic Collegiate Gothic architecture. Although 245 Beacon houses high-tech laboratories and makerspaces wrapped within glass walls and collaboration spaces, the exterior remains unassuming. Instead, the building settles into the campus weave as if it had been there all along. Granite excavated from the same quarry as the other BC buildings, greenish clay tiles lined upon the roof and warm wood framing were all intentional decisions made by our design team in collaboration with the client. Despite its contemporary programming, the new building remains respectful of the rich history it was constructed into – and we aim to share these narratives through the photography. 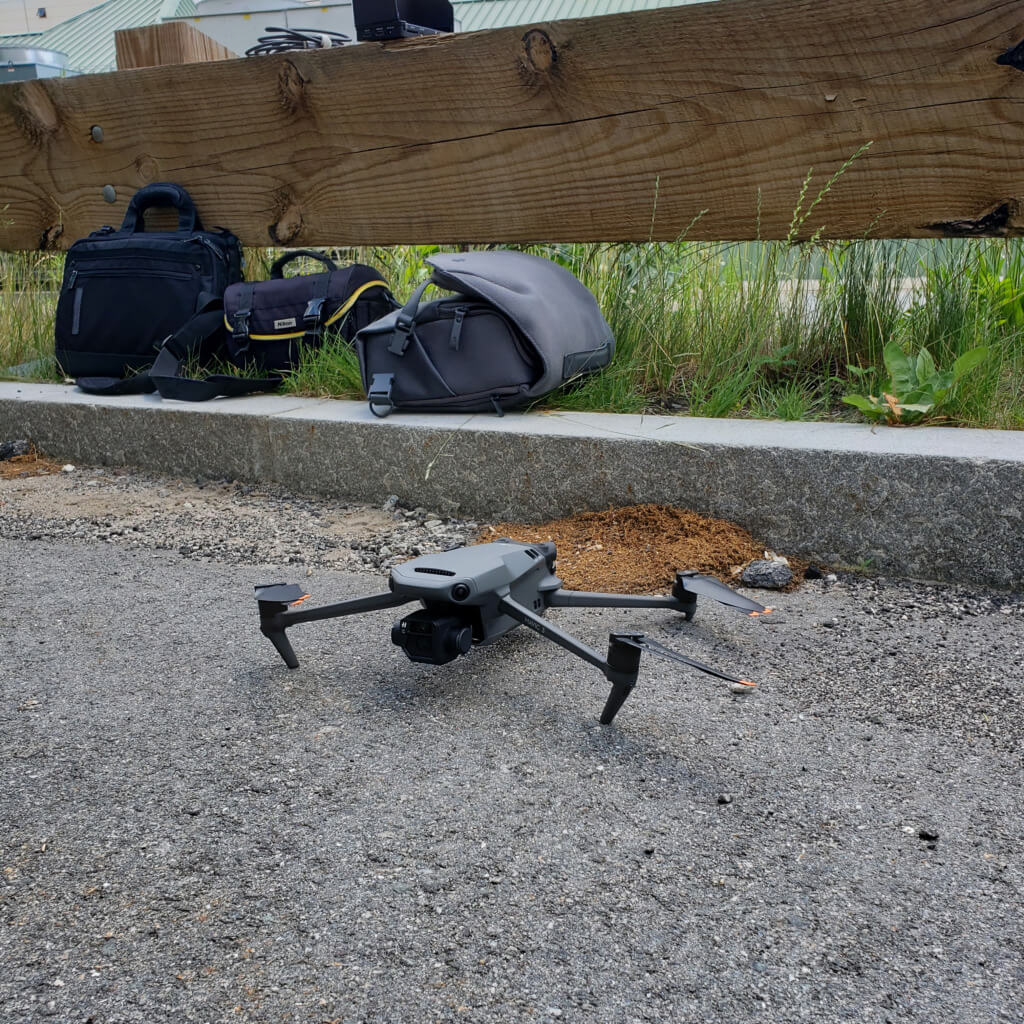 The day’s special guest was the drone, its job to capture overhead angles and the position of 245 Beacon among the rest of the campus grounds. An aerial photo snapped with Gasson Hall, Boston College’s oldest building, in the foreground displays the two in tandem – a sight that is easily realized in person but difficult to provide context for from a ground level photograph. 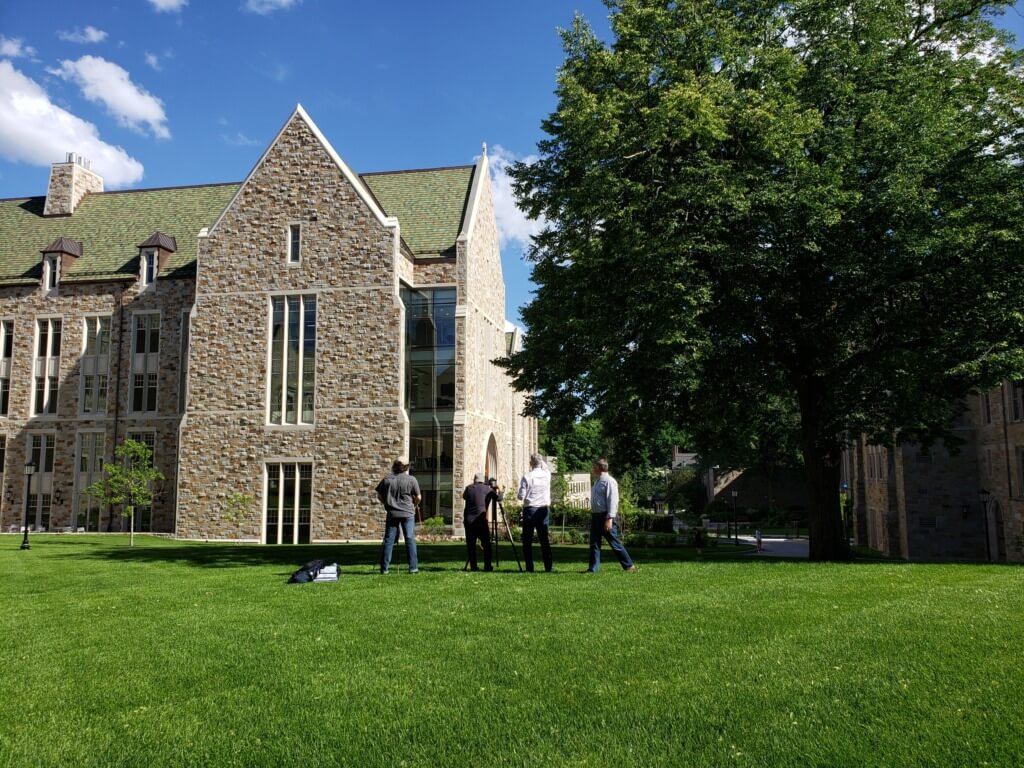 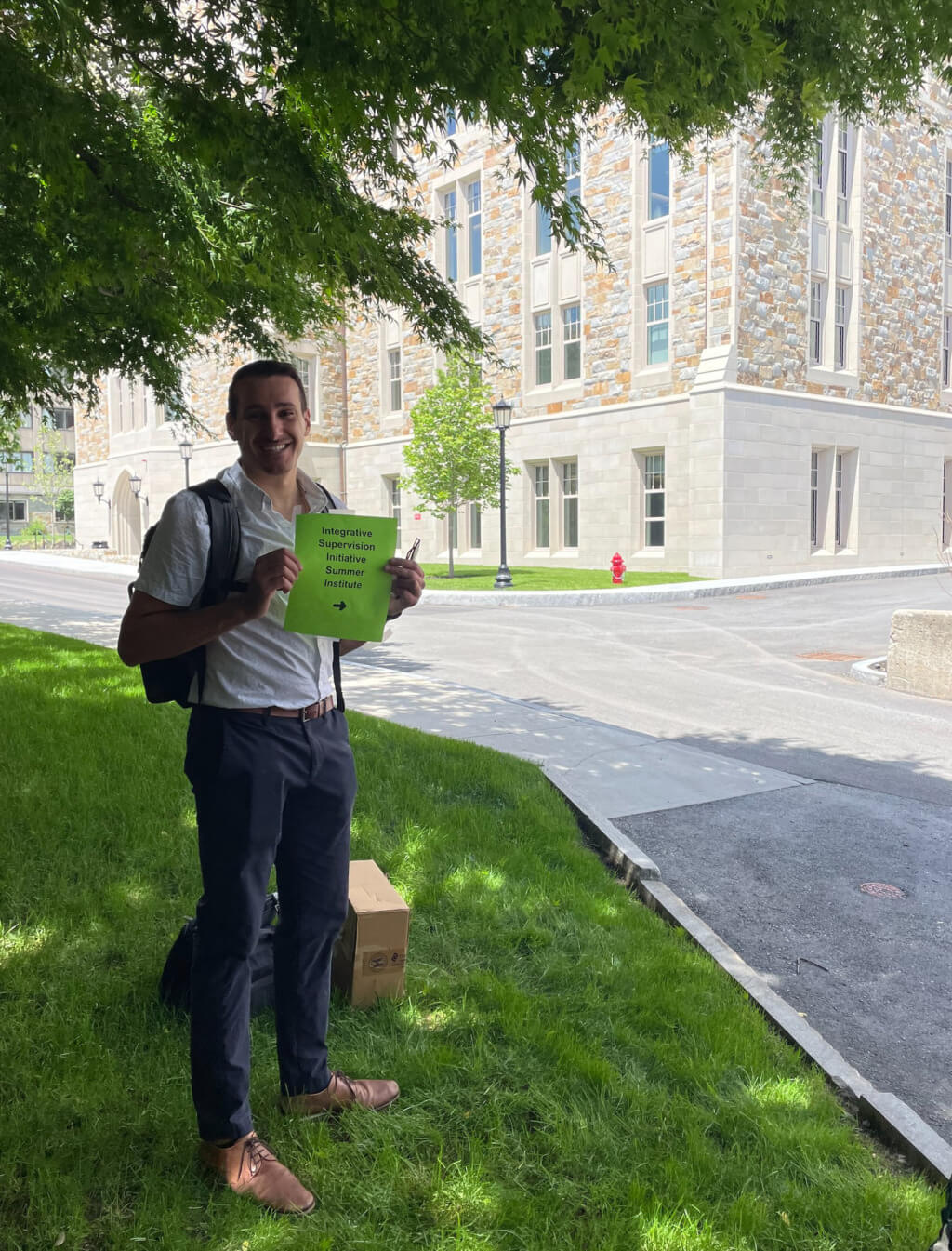 Designer Emilio Cardarelli temporarily working as a summer camp staff member because we needed to move the sign out of the shot.
Photo: Diana Tsang 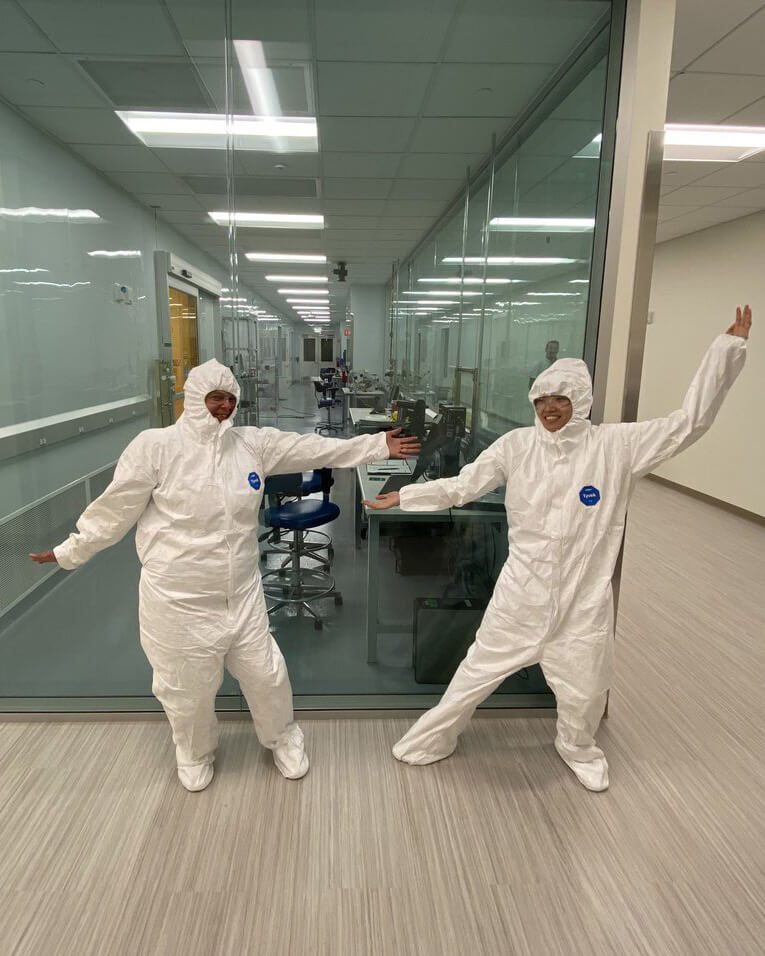 Marketing team suited up for the cleanroom!
Photo: Kevin Sullivan 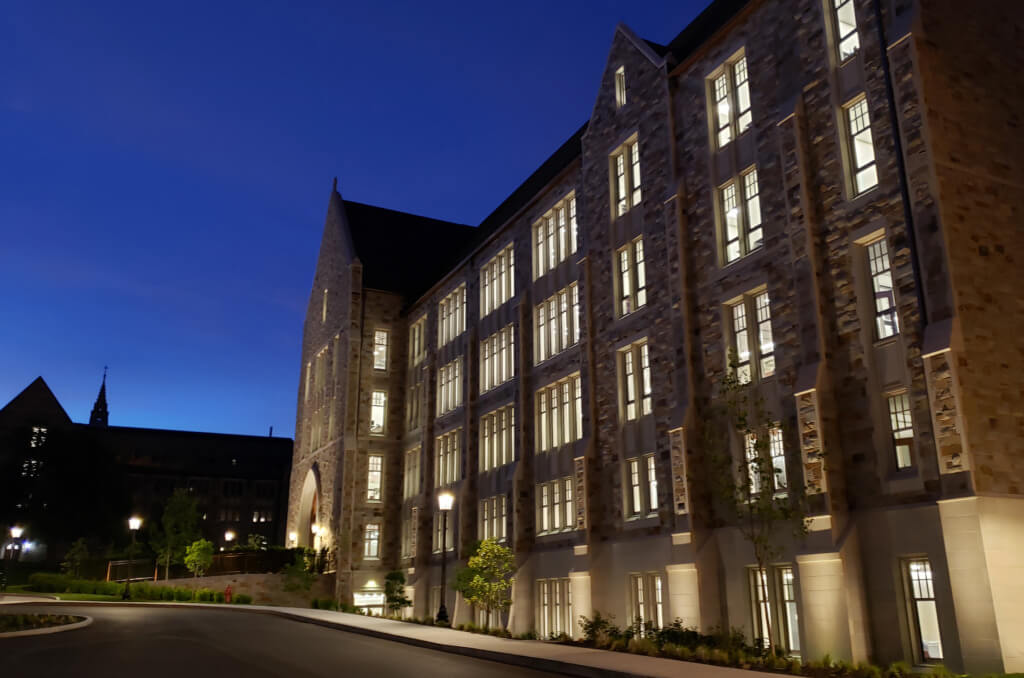 Dusk shots involve plenty of legwork – running back and forth among the floors to keep the lights illuminated. 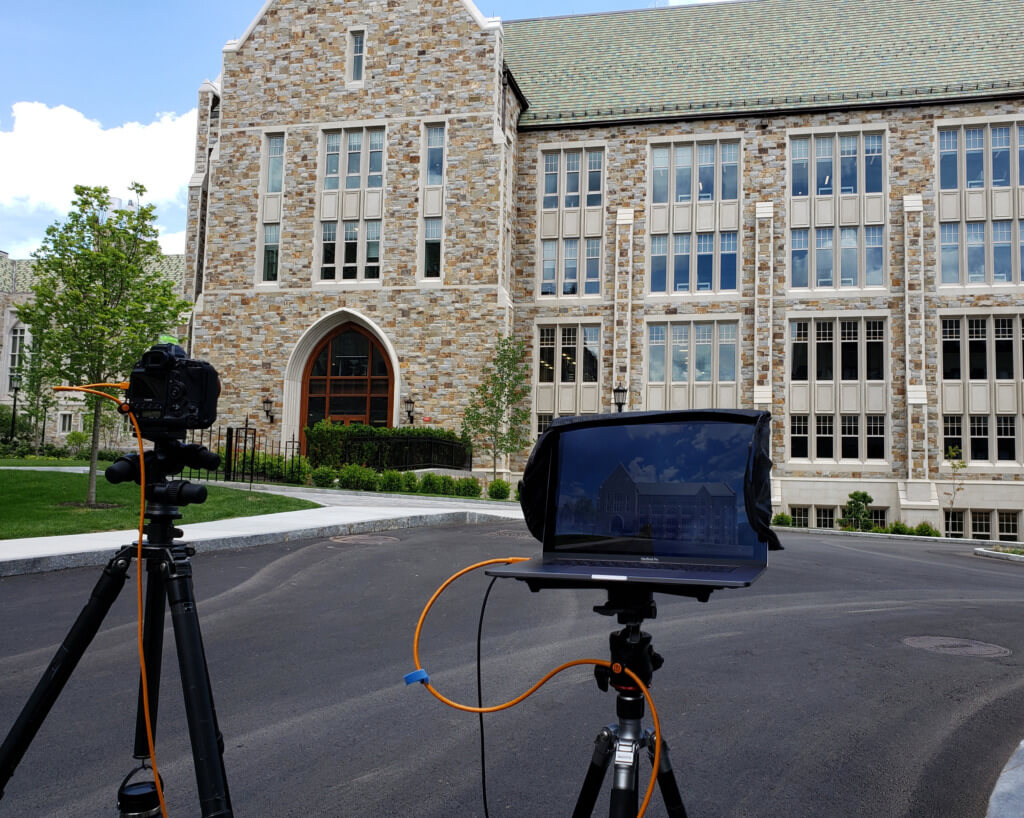 Payette works with a variety of photographers with their own methodologies and techniques to approach architecture and photography. Robert Benson facilitates a direct dialogue between himself and the architects; no time is wasted as his assistant, Dan, edits the photos directly on site. Face-to-face discussions about balance, lighting and details prove effective as we directly make changes at location. The process is collaborative, raw and genuine. By the end of the day, proof-ready photos are available for scrutiny for when we return to the office.

Discovering magical moments together, such as the sunlight revealing dappled texture onto the stone façade or planes of glass and stair aligning into perfect quadrants at the right perspective, may be one of the most rewarding parts of participating in photoshoots.

We look forward to sharing the final photos!