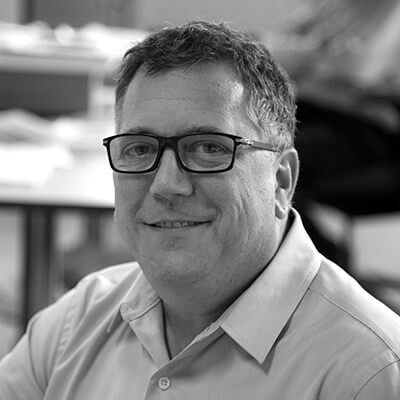 The 105 by Breakthrough, otherwise known as ‘The 105,’ is now deep into construction and is progressing well. Our core team has been making weekly site visits, attending virtual project meetings and managing submittals and RFIs. The construction phase began late in 2019 with site clearing and support of excavation work, and kicked into high gear in February 2020, just before the pandemic brought things to a halt. 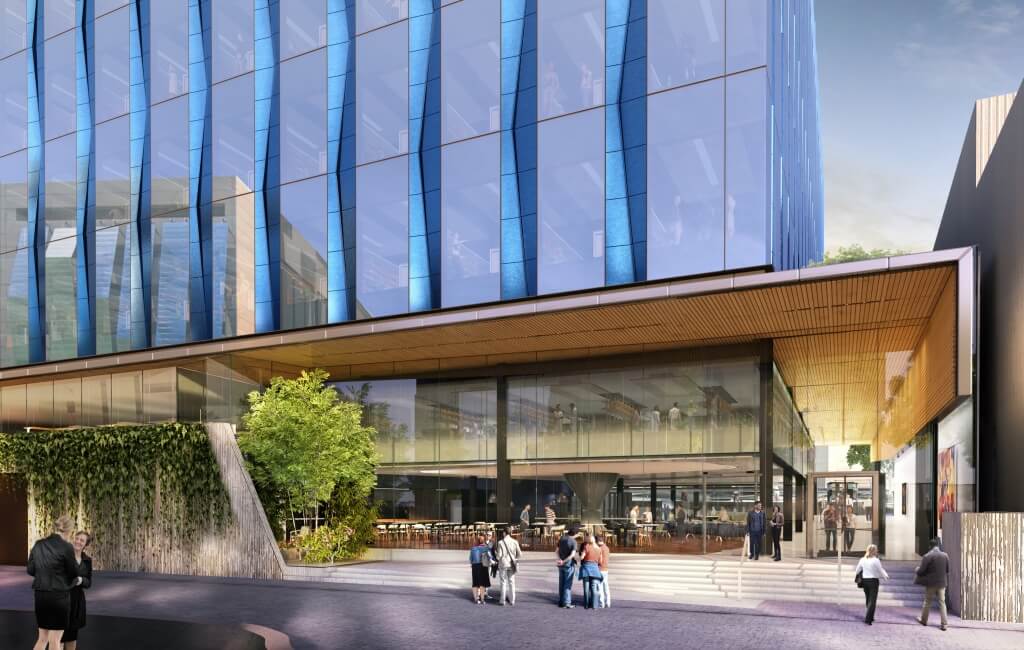 Our Construction Manager, Consigli, has done a very good job of managing the challenges posed by COVID-19. The construction site was initially closed for several weeks in March and April of 2020 but it was one of the first sites in the City of Boston to reopen. The construction schedule was initially adjusted by approximately 6 weeks, but most delays were mitigated by the fact that many subcontractors and suppliers devoted full teams to the development of shop drawings and submittals, even as the schedule’s fate was uncertain. The 105 also benefited from a surplus of available labor, especially in the concrete trades. Once the project site reopened, we benefited from heavily staffed and highly skilled teams of laborers who were motivated to make up lost time. The team is still on track to meet a January 2022 deadline for substantial completion.

Traffic on the site is averaging between 70 and 80 laborers per day and the list of trades on site is growing by the week. The dense urban site has impacted the staging and progress of the work and is one of the reasons so many trades are active simultaneously. Because the building mass extends to the property lines and is flanked by two buildings and the Haul Road to the east, there are minimal on site staging areas available for the storage and distribution of materials. For this reason the erection of the superstructure has been divided into three zones: A,B and C. Steel and concrete progressed from foundation to the top of the penthouse for zones B and C, while almost no work progressed on Zone A so it could be available as a site for cranes and material staging. Consigli and their subs then rapidly completed section A in time for an official topping out earlier this month.

One of the more exciting recent developments is the installation of the blue terracotta façade panels that define the upper lab volume at floors 3 through 7, the EWS1 panels. The first of over 700 unitized façade panels began arriving on the site in phased deliveries starting at West 2nd Street (south) façade. The panels are installed west to east beginning at the third floor, working around the site and then vertically. Panels are stored on the third floor as they arrive in groups consisting of approximately one story at a time. Deliveries are scheduled weekly for the additional groupings of panels. The upper floors of the building are scheduled to be enclosed by the end of June. As one of the feature aspects of the design begins to be realized on site, it is useful to reflect on the collaborative process that got us to this point.

We found several benefits to having direct builder and manufacturer involvement during the design process. From the beginning, we anticipated the challenges in executing the design, which called for very large pieces of glass combined with glazed terracotta that required a high level of technical expertise. We knew the proposed complex shape of the terracotta might be achieved in a variety of ways depending upon the terracotta manufacturer. We also knew that the there was a finite list of fabricators who could produce the glass and terracotta to the quality level that would support the design. Lastly, we knew that the project had to be executed within the local labor market. 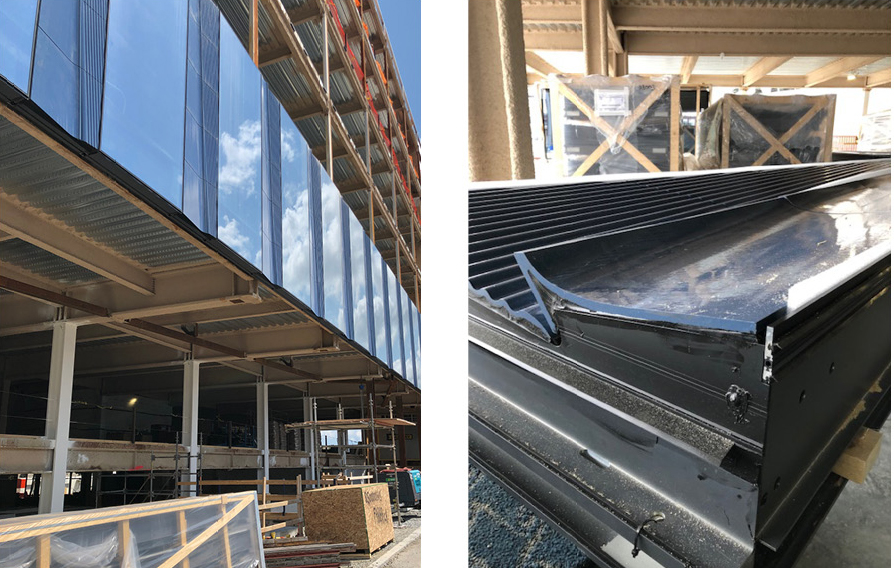 Initially we identified two pathways to manage these constraints and project cost. The basis of design called for a unitized curtain wall with cast terracotta panels. An alternate was identified that allowed for stick-built construction with extruded terracotta panels. Tapping into the resources of our Fabrication team, we constructed full and quarter scale mockups of the two options to demonstrate the impact that each construction method would have on the final design. This allowed us to build consensus with the Owner and Construction Manager about the value of the original design goals and to cement stakeholder interest in maintaining the highest possible quality.

Working with Consigli, the design team issued a building envelope RFQ as an early bid package at the conclusion of the Design Development Phase to select a Design Assist partner. We requested respondents assemble a team of curtain wall and terracotta fabricators and local installers, and submit their qualifications, proposed methods of implementation and cost. We were very fortunate to partner with Fabbrica out of Treviso, Italy and Windsor, Connecticut. Fabbrica has been extremely receptive to our initial design for the façade and instrumental in realizing our vision. 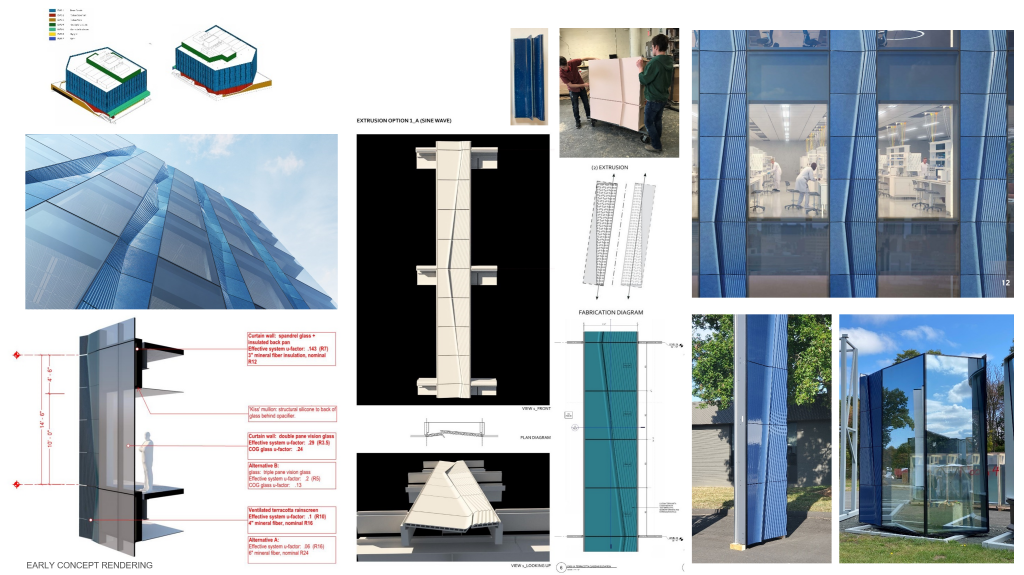 With Fabbrica, and their partner Moeding/Shildan, we developed an innovative approach to the fabrication of the terracotta panels that relied on standard extrusion production processes with minor post extrusion cutting, resulting in a solution that achieved the quality of the original basis of design for the price of the deduct alternate. During design assist, we again used updated in-house mockups incorporating the fabricator’s production criteria and our proposed modifications to their typical process. This allowed the manufacturer to ‘buy into’ the design and feel confident that the proposed design was achievable. 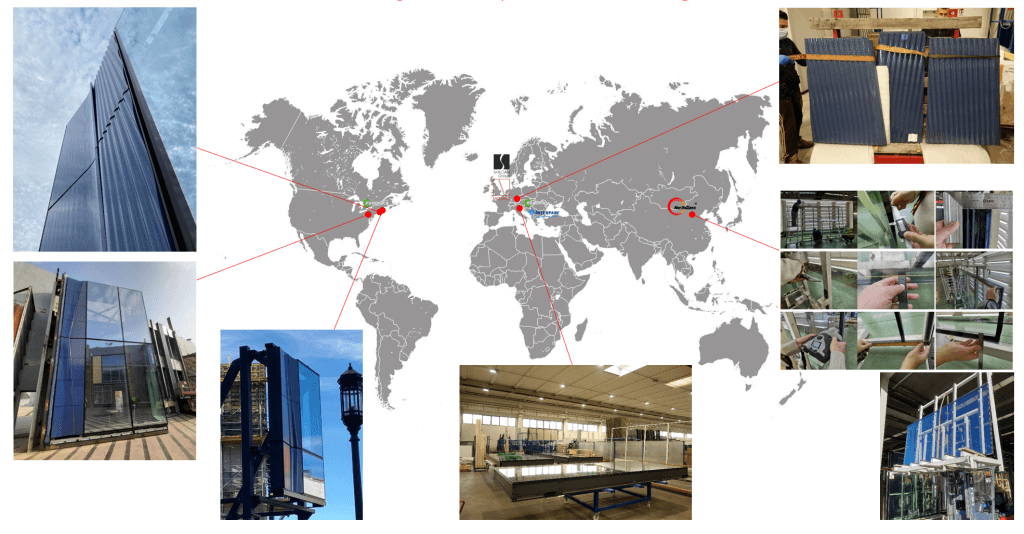 The shop drawing production and review processes moved rapidly and fluidly, with a brisk exchange of information between our team, Fabbrica and Moeding/Shildan. Visual and performance mockups were developed simultaneously and ready for initial viewing in June and July of last year. Approvals and material releases were obtained by November and the first factory runs of materials were ready for viewing at the end of 2020. The international travel ban made it all but impossible to visually inspect materials in person. We opted to tap the resources of our façade consultant, Front, Inc., with staff in Italy and China, who were able to act as surrogate inspectors for the design team. Although a difficult circumstance, it demonstrated the trust that each member of the design team was able to place in the other for the shared goal of project success.

It is now possible to visit the site at various times of day and experience the liveliness and intangible qualities of the materials. The flush relationship of the terracotta to glass constantly shifts in appearance with the changing light between figure and ground, between dynamic reflection and static matt, between figuration and monolith. In the coming weeks, as more of the panels are installed on the south side, the temporary shoring columns that have been supporting the large perimeter cantilever will be removed and the full effect of the hovering lab volume will be revealed to the street. 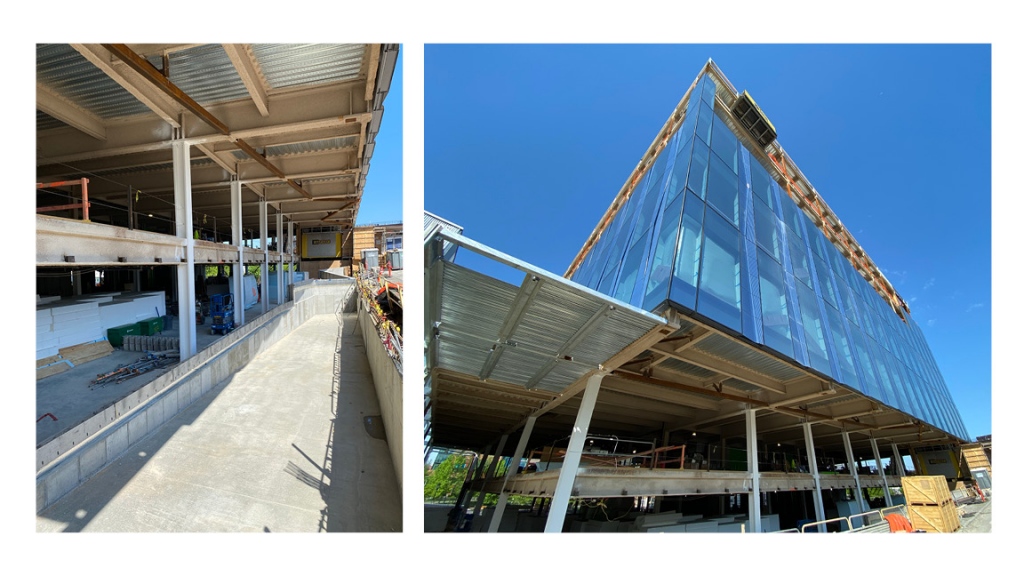