Planning for the future is an essential characteristic in good architecture, especially in healthcare. It can save time, resources and disruptions in service. Today, we examine how details considered during a renovation at Dana Farber Cancer Institute in 2014 allowed for a seamless MRI replacement in 2017.

In 2014, we designed and renovated the Dana Farber DL1-CMCF CRL space. Knowing that an MRI replacement would be needed in the near future, our team incorporated a hatch design that allowed for existing MRI located in the basement to be easily removed from the building. Determining the location of the hatch was a crucial aspect of the design, as it had to allow the existing MRI to be easily moved in and out of the building with minimal disruption to the patients and staff.

The location also had to be coordinated around both existing MEP and new MEP infrastructure so no ducts, pipes or wires would be in the way when it was time for hatch to be used. The hatch, which is approximately 9’-10” X 9’-10”, was designed in the staff lounge on the first floor basement, which opens onto the sidewalk adjacent to the main entrance of the hospital. The staff lounge was an ideal location for the hatch because of its close proximity to the MRI room, as well as its function. This room can be taken offline for a couple months without interfering with patient services. 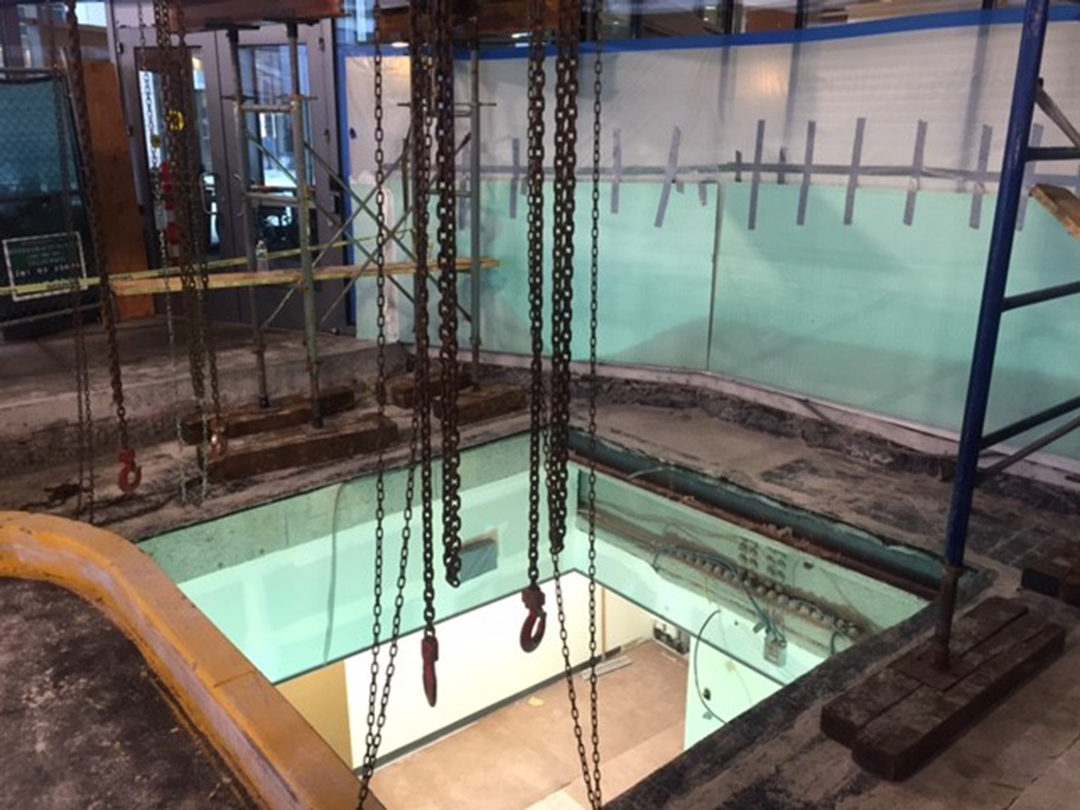 In 2017, Dana Farber decided to put the hatch to the test and replace the existing MRI with a new MRI.   The hatch was designed to be easily accessible. The existing concrete sidewalk was removed, revealing pre-cast hollow core planks which were held in place by metal angles. These planks were removed, as well as the existing ACT ceiling and lights in the staff lounge to reveal an opening clear of all MEP work.  Riggers OB Hill set up a frame system over the hatch and using a pulley system pulled the existing MRI out by hand.  About a month after the existing MRI was removed, it was time to install the new MRI.  Again, the riggers slowly and carefully lowered the MRI by hand into the space. To everyone’s relief the hatch was sized and designed perfectly, making an easy removal and install!