One of our many in-house research efforts is a large, collaborative project. We investigated the Thermal Performance of Façades through the AIA Upjohn Research Initiative.

There is often a parapet at the top of a building where the wall interfaces with the roof. Using common construction techniques, these unique assemblies typically maximize envelope surface area near a complex interface, which can have the impact of emphasizing the effect of a thermal bridge and increasing heat flow. Unfortunately, it is rarely possible to effectively photograph these conditions from the inside and quantify the assembly R-values in the field with an infrared camera. Knowing this was an issue for heat loss, however, we were still able to perform simulations and study the impact of changes.

We found that the structure required to support the parapet, whether it is concrete or cold-form metal framing, typically leads to a considerable gap between the façade insulation generally on the exterior of the parapet and the roof insulation, which runs on the interior. Furthermore, wood nailers, cant strips and other roofing accessories tend to exaggerate these impacts. 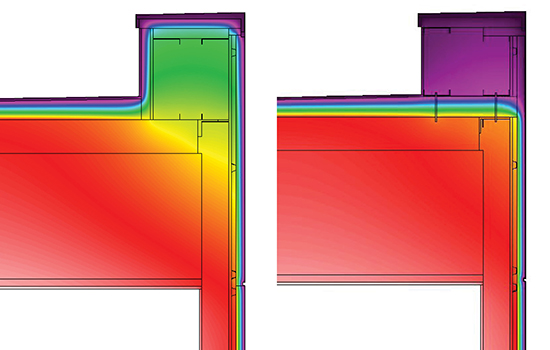 THERM Simulation of parapet: insulating around (left) versus insulating under the parapet (right)

One question we found intriguing was whether it was better to insulate around the parapet—thereby covering all structural interfaces—or underneath it by finding a way to design a structural connection that effectively attaches the parapet after installation of the insulation. Since there are many variables in the detailing of a parapet, we started with a sensitivity analysis of parapet height normalized to one construction type. Because the degree of impact of the assembly depends on how much of the building we are looking at in conjunction with the parapet, we also normalized on an extracted detail that includes 24” in height of inside wall surface and 48” in length of inside roof surface. These were based off the Morrison Hershfield (Morrison Hershfield 2011) report’s findings on the effective length that a parapet affects the heat flow in these assemblies.

Starting with a well-insulated parapet, the study into the impact of height showed that there was about a 6% decrease in assembly R-value for every 15” increase in the parapet height. This is due simply because the additional surface area acts like a fin that radiates. Considering these results, we concluded the best way to avoid a diminishing R-value is to insulate beneath the parapet, thus effectively eliminating the negative impact from the height of the parapet.

Moving into greater detail, we also studied typical construction methods for parapet systems. Considering cold-formed metal framing parapets and cast-in-place concrete assemblies, we found that R-values were reduced from a theoretical system 63% and 50%, respectively. This decrease in thermal performance was largely due to the large gap in insulation that occurred at the parapet. We also studied a third case where a cold-formed metal framing parapet had been installed over continuous insulation; that design, however, had relied on metal kickers, which we found virtually eliminated the performance gains.

We studied two systems for improving the typical details. The cold-formed metal framing option had continuous insulation under the parapet to the façade insulation to create a continuous thermal barrier. To support the structure of the parapet, we added a metal framing structure and included intermittent connection back to structure using lower-conductivity materials such stainless steel bolts. This increased the R-value in the assembly by 25-65% when compared to the baseline system. For the concrete parapet, we tested a commercially-available structural thermal break designed for concrete slabs (balconies) and installed this in a vertical orientation. This improvement decreased the heat flow through the assembly by 27%.