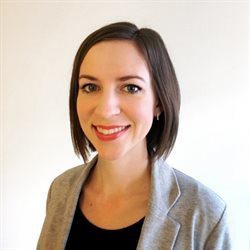 Last week, Payette’s Young Designer’s Core (YDC) organized a joint construction tour of the Tufts University Science & Engineering Complex (SEC), which is currently under construction and scheduled to open next June. This tour was done in collaboration with Simpson Gumpertz & Heger (SGH) and Turner, as part of a series of joint tours to connect young professionals across the A/E/C industry. During the SEC tour, each firm highlighted specific aspects of the project according to their respective roles. 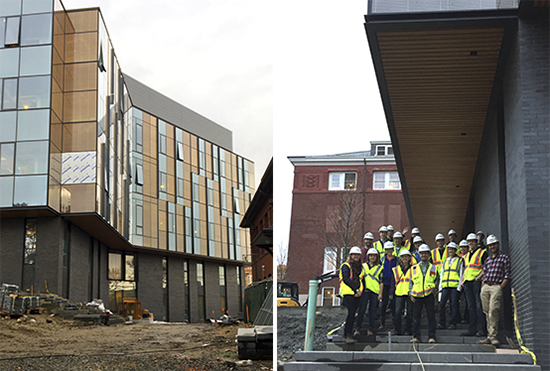 Megan van der Linde (Payette), Luke Niezelski (SGH), Kristyn Moen, Dave Rob and other project engineers (Turner) led an excellent and informative tour around the nearly completed exterior and through the roughed-in interior spaces. The exterior palette includes Manganese Ironspot brick, wood soffits and OKAWOOD screens in the unitized curtain wall, which are offset by the red brick and slate roof of the existing buildings on the site. The new SEC building ties into a building from 1900 with an addition from the 1960s. Each portion was constructed with a completely different structural system. It was fascinating to learn of the critical seismic connections, expansion joints, fire separations and intense water proofing occurring at the junction of old and new.

An L-shaped gap between the 1900s and 2016 construction becomes an active atrium at the heart of the complex. Exterior walls of the existing building were maintained within the new atrium to highlight the original materials and detailing. A large glass skylight, braced and cantilevered off the new construction, covers the atrium. It offers a large amount of natural daylight – even during the rainy evening of our tour. 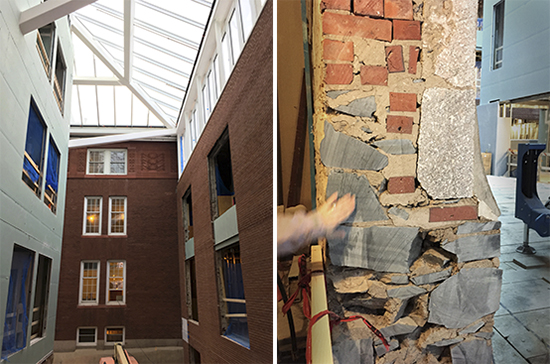 As we moved up the building from the 1st level, we were able to see a different view of the atrium on each floor and a closer look at the expansion joints and cross bracing for the skylight. On the 3rd level, we were met with exceptional views looking out over the tree line – with the Boston skyline cutting through the haze. The interior walls were mostly framed, and though no finish work has been started, we were still able to get a feel for the layout of the new labs and offices. On our way out, we paused for a look at a temporarily exposed slice through the existing wall of the 1900’s building. To see the original construction in true section was very telling. The old foundation was a surprising heap of jagged fieldstones with brick and granite pieces piled on top.

With just seven more months of construction scheduled, it will be exciting to watch the finishing touches put in place as the interior takes on more definition and the site is landscaped.