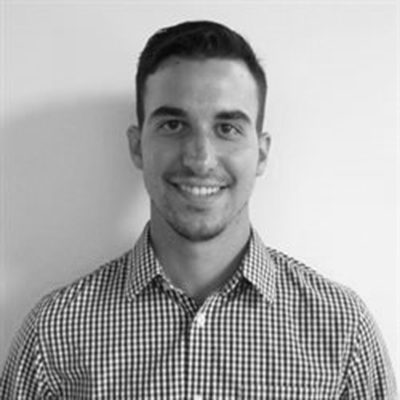 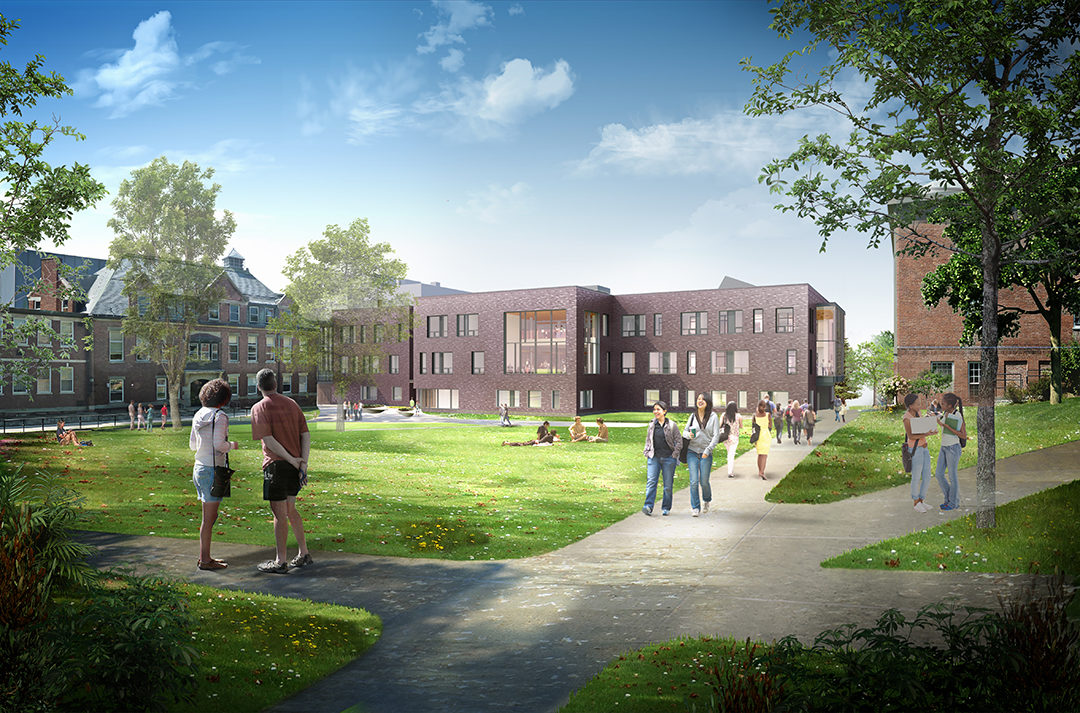 While the Williams College Science Center South Building nears completion, design work on the North Building has wrapped up and construction soon to commence. Since our last update, the North Building design has evolved, highlighted by new massing and façade approaches that build upon on previous key design strategies.

We relocated the main mechanical units from the roof to the basement and revisited the building façade to create a more contextual relationship to the immediately adjacent Thompson Science Center and Clark Buildings. These changes resulted in a dramatic alteration to the building’s appearance, removing the need for the gabled roof originally housing the mechanical units, and changing the primary building materials to brick and stone panels from the heavy stone appearance of the original design. 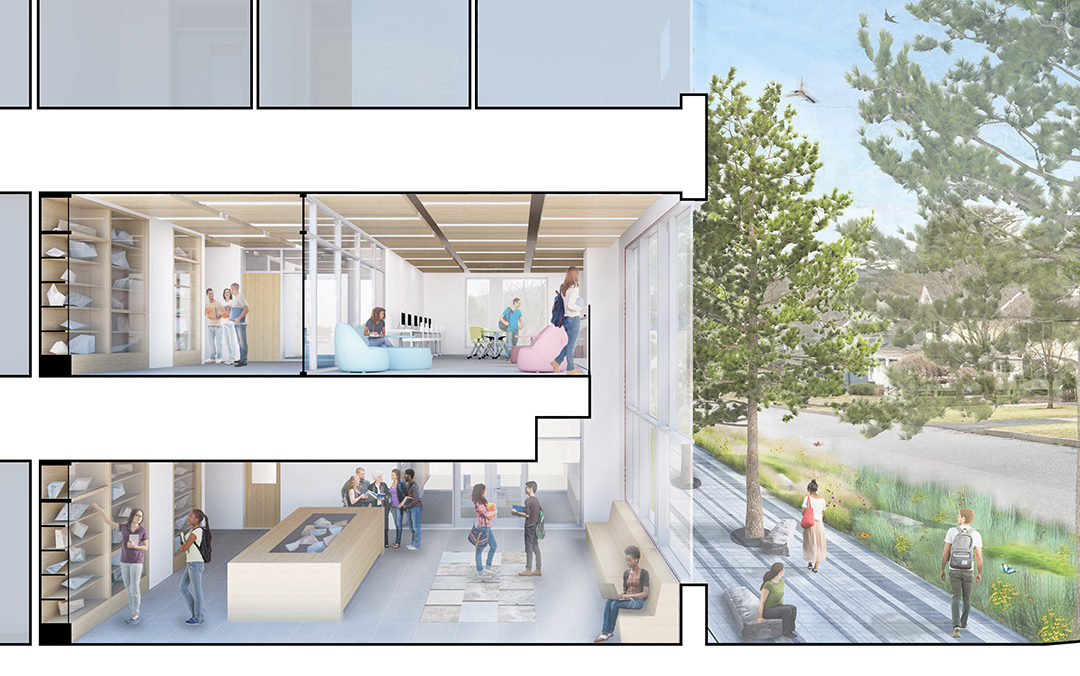 With the new roof condition and façade strategy, new massing design solution further enhances the relationship between the three departments occupying the new building; Mathematics & Statistics, Psychology and Geosciences. The new massing highlights the three departments through the building form by pushing and pulling the wings while maintaining the internal connectivity via a main circulation corridor linking each department’s heart space.

The heart space for each department is unique to their needs, Math & Stats includes a double height study lounge in close proximity to professor’s offices and classrooms with a light monitor overhead and a large window to the north. Psychology showcases a double height lounge with two large windows offering views to the main quad and mountains beyond, and Geosciences, at the south, presents itself as a main entrance on Hoxsey Street while providing a glimpse of the department for passerby. 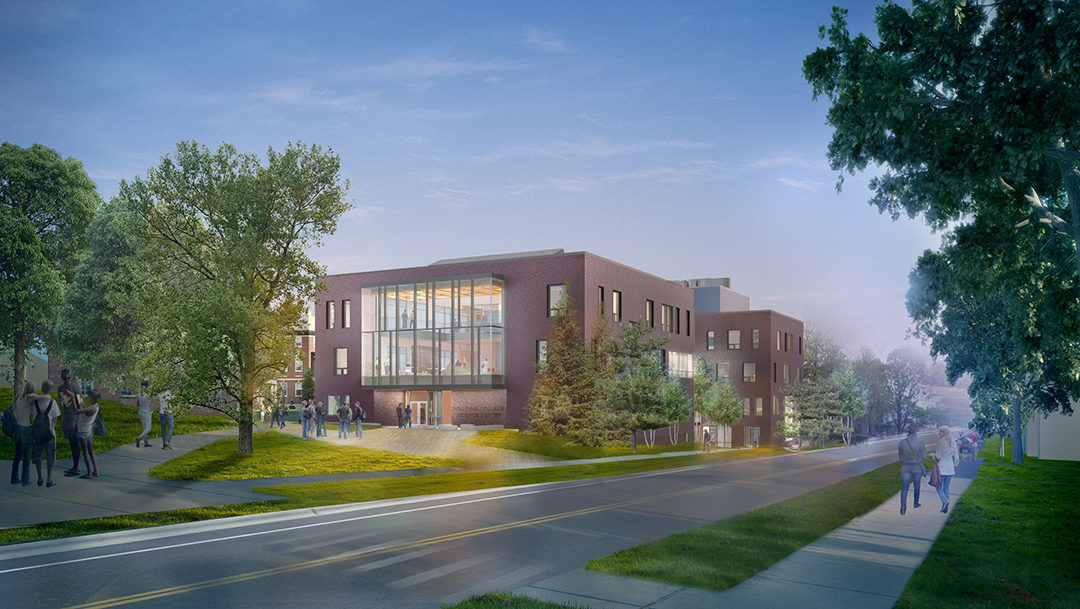 The façade maintains the illusion of irregularity with the fenestration, combined with a sense of order and clarity, as large portions of curtainwall reveal each departmental heart space. These large curtainwall pieces anchor the massing, and the different window types (24 to be exact) relate to faculty and administration offices, as well as lab spaces. Windows are thoughtfully placed so that each room gets an equal amount of natural light. From one large window or split between two smaller windows, the glass proportion in each office remains the same. Some of the larger expanses of glass curtainwall are also meant to introduce the building, not only to users, but to the building’s contextual surroundings. The north and west entrances have pronounced glass volumes overhead, gesturing out to the street.

The design team also expanded on the use of granite at the base. Where the terrain descends is distinguished by a datum line of granite, maintaining the aesthetic of a strong base for the masonry above. Possibly the biggest change from the initial design is the departure from a gabled roof. The design team not only addressed how the building meets the ground, but also how it meets the sky. It was decided that granite would act as a parapet cap, and as a result, the granite at the base and parapet cap has undergone modifications to integrate with the surrounding campus context.  The design team is also continuing to work with Williams to refine a contemporary yet contextual exterior aesthetic with the brick and mortar in relation to other campus buildings.

One of the advantages to removing the gabled roof, was being able to introduce roof monitors to bring in natural light from above. One roof monitor highlights the monumental stair directly adjacent to the main axis of entry and psychology heart space. The other roof monitor is angled toward the south, to capture the most natural light. From the exterior these features will not be apparent, but once inside they will be hard to miss.