Fume Hood Basics
Fume hoods contain gases by pulling air in with a fan. This mechanism works to keep the gases away from the person using the hood (user). Fume hoods must maintain negative pressure to the surrounding room. They draw air from the room into the hood in order to prevent contaminants from escaping. Air from the room enters the hood primarily through the face opening (sash opening—yellow zone in the diagram below), with smaller volumes entering through a gap below the airfoil at the bottom edge of the work surface and face opening and bypass louvers above the sash. The sash can open vertically or horizontally and be fully-open, partially-open, or fully-closed, which still pulls some air in. Hood widths typically come in one-foot increments from three feet upward, usually five or six feet in width. While the overall widths are standardized, the interior widths and depths vary per manufacturer and model. These small differences can affect the speed at which air needs to be pulled in to meet certain requirements, and the increased depth can impact the architectural planning of the lab.

The air speed that enters the hood is known as the “face velocity,” measured in feet per minute (FPM). Face velocities have traditionally been 100-120 FPM; however, current recommended standards allow for face velocities down to 60 FPM.[1] Some manufacturers publish that their fume hoods are able to achieve containment as low as 40 FPM. These hoods should be reviewed and studied in more depth to ensure they pass the ASHRAE 110 “As Used” containment test for each unique installation (see links below), taking into account the active working condition of the lab including equipment within the hood, user movement, HVAC airflow, adjacent architectural elements, etc. Owner Environmental Health and Safety (EH&S) groups should be engaged with early in the design process to determine the appropriate face velocity. 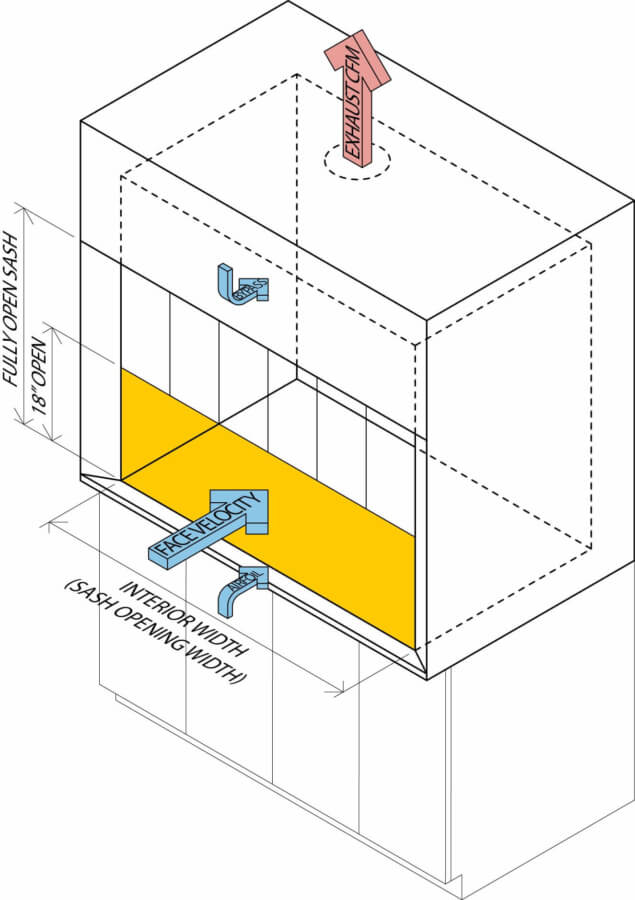 Diagram showing air movement in and out of a fume hood

The air that passes through a hood, measured in cubic feet per minute (CFM), is exhausted directly outside, meaning that the air is conditioned and used once. This is both expensive and energy-intensive. For example, the average 5-foot-wide hood at 100 FPM in our study uses ~640 CFM, while the average 5-foot-wide hood at 60 FPM uses ~380 CFM. The exhaust CFM required for a hood with an open sash is equal to the total open area of airflow entering the hood multiplied by the face velocity:

As supply air needs govern the size of the building’s air handling units (AHU), and tempered supply air is expensive, even a small reduction in exhaust CFM can have a major impact on the energy usage and cost to run the AHU. Some standard fume hoods can operate at 70 FPM and maintain containment, but to reduce face velocities to 60 FPM and possibly beyond, a High Performance Fume Hood is needed to achieve “low flow.”

Like fume hood interior dimensions, their exhaust CFMs vary by manufacturer. While current standards allow hoods to operate at 60 FPM, which all manufacturers meet, some manufacturers publish that they are able to reach 40 FPM while still meeting the ANSI Z9.5-2012 and ASHRAE 110 requirements:

High Performance Fume Hoods cost more than standard hoods. For some projects that are not going to take advantage of the lower velocities (below 70 FPM), it may not make sense to go with a high-performance hood. However, the possibility of reducing airflow in the future will be limited.

When possible, every project should try to reduce the number of fume hoods first and then reduce the face velocity using High Performance Fume Hoods for better building energy performance. It is a team effort with your engineers and owner to drive energy savings. For more information on fume hood basics, please visit the following resources:

Part three will follow, discussing the impact of lower face velocities on energy savings and the importance of shutting the fume hood sash.